Bickley was born in De Leon in Comanche County, Texas. His father, C. A.,  a Methodist pastor,  did not use his full name of Columbus Alonzo Bickley (1879-1964). Cecil's mother was the former Irene McCarver (1884-1926). The parents are interred at Resthaven Memorial Park in Lubbock, Texas.[1] His paternal grandmother, the mother of C. A. Bickley, was born on July 4, 1877, and received the unusual first and middle names of "America Independence".[2]

Bickley graduated in 1933 from Texas Tech University in Lubbock and began employment with M Systems Food stores in East Texas. In the earlier oil boom town of Kilgore, Bickley met his wife, the former Peggy Patterson (1913-2007). They wed in 1939 in Abilene, Texas, and thereafter moved to Denver City. A native of Bernice in Union Parish, Louisiana, Mrs. Bickley was at first reluctant to move to the then isolated West Texas community. She joined with her husband in the formation of Bickley's Grocery, a mainstay of Denver City from 1939 until their retirement in 1974, at which time Thriftway Foods became the only supermarket in the community.[3]

Bickley was a founding director of the Yoakum County State Bank (since Wells Fargo), the first financial institution in the town. He was a charter member of both the Denver City Lions Club and the Chamber of Commerce. He was a Mason and a Shriner and served on the boards of the Yoakum County Hospital and Library. He promoted public schools, particularly athletics, music, and literary programs. Bickley served as a founding alderman of Denver City, having been elected to a single four-year term in 1940, just after his arrival in town. In 1965, he was named the "Outstanding Citizen of Denver City."[4] Because of his civic involvement, Bickley became a living legend in his community and was often called "Mr. Denver City." 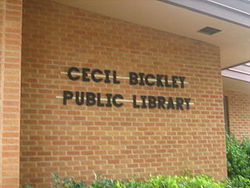 The Yoakum County Library is named in honor of Bickley.

Peggy Bickley became an energetic civic booster in her own right through involvement with the Order of the Eastern Star, the Denver City Museum, the  annual American Cancer Society fund drive, the First United Methodist Church, and the Yoakum County Library, subsequently named in Cecil's honor. In 1984, the Denver City Chamber of Commerce named Mrs. Bickley as the "Outstanding Citizen", nearly two decades after her husband received the honor. The Bickleys had two children, Peggy Bickley Point of Austin (born Christmas 1941) and William Michael "Mike" Bickley (born October 7, 1946) of Fort Worth.[5] Peggy and Mike were born in Hobbs, New Mexico, because there was no clinic at the time in Denver City.

Cecil and Peggy Bickley are interred at the Denver City Memorial Cemetery.[5]