A Chemical weapon is a weapon, usually in gas or liquid form, that releases toxic chemicals when exploded. The most well known chemical weapon, Mustard gas, was used extensively during World War I. Other types include sarin gas, nerve gas, VX, and BZ.[1] Gas masks and other protective gear exists to protect against chemical weapons. 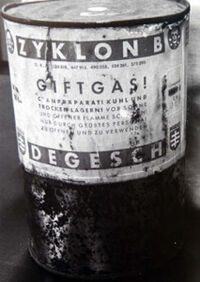 Zyklon B is a cyanide-based toxic gas. A modern application of it this substance is as an insecticide. However, it is also lethal to humans in sufficient concentration. During World War II, the German Nazi party used Zyklon B to kill millions of people throughout the holocaust. As victims arrived at the death camps, they were divided in two: those fit for work, usually young to middle aged men, or possessed a special skill needed in the camp, and the remainder sent for delousing in the showers. The “showers” was actually a sealed room in which Zyklon B was dropped through a hole in the ceiling. The cyanide-based vapors would kill the entire room within minutes.