Difference between revisions of "Chicago" 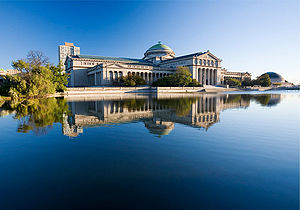 Museum of Science and Industry.

Chicago is a city located in Illinois on the western shore of Lake Michigan. It is the third-largest city in the United States, with approximately 2.8 million residents. [1] and has the third largest population of any city in the United States.[2]. The Chicago metropolitan area, which extends from southern Wisconsin to northeastern Indiana, contains approximately 9.3 million people. [3]

The city hosted the 1968 Democratic National Convention when Richard J. Daley was mayor. The convention was disrupted by radicals such as Abbie Hoffman.

The world-renowned Art Institute of Chicago houses both a museum and a school. [6]