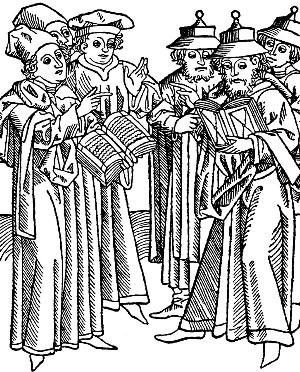 A medieval woodcutting depicting a theological debate between Christians and Jews

The history of relations between Jews and Christians is, in the words of Pope John Paul II "a tormented one."[1] Christianity today "has long been synonymous with tolerance: in general, anti-Semitism is mainly a fringe phenomenon, neither popular nor respectable."[2] The term anti-Semitism was first used by William Marr in 1879, however "documented prejudice, social and economic isolation, persecution and violence against the Jews predates Marr and his supporters by more than 2000 years."[3] Christianity's relationship with Judaism, however, is still unlike that between any other religions. In the words of the Vatican: "The common future of Jews and Christians demands that we remember, for "there is no future without memory". History itself is memoria futuri."

By the second century "both Judaism and Christianity were trying to distinguish each from the other in the eyes of Rome, as both had unique political concerns."[4] Eusebius wrote that "the promises of the Hebrew Scriptures were for Christians, and the curses were for the Jews." He argued also that the Church was the true Israel, or "Israel according to the Spirit", heir to the divine promises, and found it essential to discredit the "Israel according to the flesh" to prove that God had cast away His people and transferred His love to the Christians.[5] Justin Martyr further claimed that the Jews were originally selected by God because they were such an unspiritual group and needed added laws. He attacked the Jews for rejecting Jesus, for killing Jesus and for leading people away from salvation. He claimed the destruction of the Temple as being just punishment for the Jews.

The situation shifted dramatically in the fourth century when Constantine appointed Christianity as the official religion of the empire, leading to far-reaching legislation:

The Justinian Code was enacted by the Byzantine Emperor Justinian (527-564) and prohibited:

Enacted in 306, this prohibited:

Between 533 and 541 the council issued further edicts prohibiting:

In 692 the synod forbade Christians from being treated by Jewish doctors.

In 1050 the synod prohibited Christians from living in Jewish homes.

In 1078 the synod made it mandatory for Jews to pay taxes to support the Christian Church.

In 1215 the council ordered that Jews must wear distinctive badges to distinguish them from Christians.