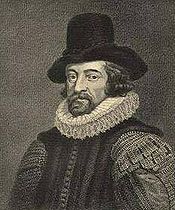 In his essay Of Atheism Sir Francis Bacon wrote: "I had rather believe all the fables in the Legend, and the Talmud, and the Alcoran (Koran), than that this universal frame is without a mind."[1]

A notable fact in relation to Christianity and science is that the birth of modern science occurred in the geographic area of Christianized Europe.[2] Christians awed by the grandeur of God's creative work have long striven to understand His creativity through scientific study.

Sociologist Rodney Stark investigated the individuals who made the most significant scientific contributions between 1543 and 1680 A.D., the time of the Scientific Revolution. In Stark's list of 52 top scientific contributors,[3] only one (Edmund Halley) was a skeptic and another (Paracelsus) was a pantheist. The other 50 were Christians, 30 of whom could be characterized as being devout Christians.[3] Stark believes that the Enlightenment was a ploy by "militant atheists" to claim credit for the rise of science (or, to put it another way, they promoted the concept of Scientism in place of science).[4]

In False conflict: Christianity is not only compatible with Science - it created it. Stark writes:

Indeed, some of the most notable and revolutionary scientists were Christians. Nicolaus Copernicus, who first proposed the heliocentric model of the universe, was an officer of the church. Rene Descartes, who played an integral role in the development of physics, also set about to prove the existence of God in his "Discourse on Methods." Gregor Mendel, who laid the foundations for genetics, was a monk. Although Descartes, Galileo later ran afoul of the Church, the Christian genesis of his and other scientists' work cannot be ignored.

Dr. Charles Thaxton similarly states that modern science developed in the Middle Ages in Christian Europe because of the Christian beliefs of scientists.[5]

Today, the prevalence of belief in God among American scientists is much lower than it is among the American public.[6][7] Nevertheless, an article published by The University of Chicago Chronicle that discussed this study, stated that 76 percent of physicians believe in God while being highly educated.[8] Moreover, another study by the Journal of General Internal Medicine, found that 90 percent of doctors in the United States attend religious services at least occasionally as compared with 81% of the general U.S. population.[8]

Christians, though, upon being confirmed into their church study catechisms, or documents written to answer questions about their faith. According to the 1998 Presbyterian Church (U.S.A.) Study Catechism, Christians are not conflicted when it comes to choosing modern science or Creationism. Question 27 asks " Does your confession of God as Creator contradict the findings of modern science?" The answer then states, "No. My confession of God as Creator answers three questions: Who?, How? and Why? It affirms that (a) the triune God, who is self-sufficient, (b) called the world into being out of nothing by the creative power of God's Word (c) for the sake of sharing love and freedom. Natural science has much to teach us about the particular mechanisms and processes of nature, but it is not in a position to answer these questions about ultimate reality, which point to mysteries that science as such is not equipped to explore. Nothing basic to the Christian faith contradicts the findings of modern science, nor does anything essential to modern science contradict the Christian faith." " [9]

Atheists and agnostics often claim that "science" is somehow the opposite of Christianity. In fact, science is the study of the universe, and is therefore completely compatible with Christianity. See also: Scientists and belief in the existence of God