Difference between revisions of "Christopher Christie"

Christopher Christie (born September 6, 1962 in Newark, New Jersey) is the 55th and current Governor of New Jersey, having won in the 2009 election by a 49%-45% margin over incumbent Democrat Jon Corzine. A Republican, Christie previously served as U.S. Attorney for the District of New Jersey.

Christie declined to run for president in 2012, but endorsed Mitt Romney early and at a pivotal time, when Romney was struggling with evangelical statements against him. But Christie was passed over by Romney in his selection of a candidate for Vice President, despite how Christie might attracted Catholic voters nationwide, as well as Irish and Italian American voters, and helped carry nearby Pennsylvania. Instead, Christie was picked to deliver the keynote address at the Republican National Convention. However, Christie earned the ire of conservatives with his fervent embrace of Barack Hussein Obama at a critical moment, likely costing Romney the election.

Christie wanders between conservative values and RINO positions. Christie vetoes same-sex marriage bills and other socially liberal legislation. But he has nominated Supreme Court Justices who are not conservative. He pardoned a man who received an absurdly long sentence for peaceful gun possession, but Christie has also been criticized for sometimes supporting of gun control. Conservatives have also criticized him for his stance on immigration reform.[1] He believes in the liberal hoax known as global warming, [2] and has supported the Obamacare Medicaid expansion.

On the important abortion issue, Christie is a bit of a PLINO - pro-life in name only. Christie has occasionally espoused pro-life views, but since early 2010 he has done almost nothing for unborn children. The abortion rate in New Jersey remains among the highest in the nation. Still, it is unlikely that Christie would run ads in support of abortion in certain cases, as Romney did in 2012.

He easily won reelection in 2013, winning in a landslide against democrat Barbara Buono.

Prior to his election as governor, Christie's only elected experience was serving on the Morris County board of Freeholders from 1995-1998. His colleagues praised him as effective, such as requiring as policy that the freeholder board go out for three quotations even on no-bid contracts. They also noted that he was unusually ambitious, when he unsuccessfully ran for State Assembly just two months into his term. [3] During his tenure in office county taxes decreased by 6.6%. [4]

After serving as a top fundraiser for George W. Bush's 2000 presidential campaign, the Bush administration appointed Christie as U.S. Attorney for the District of New Jersey and served from 2002-2008. He was also one of the 17 U.S. Attorneys on Attorney General Alberto Gonzales's advisory commitee. Christie's most high profile prosecutions included State Senator and Newark Mayor Sharpe James for mail fraud, wire fraud, and conspiring to rig the sale of nine city lots to his mistress. [5] He also led the felony conviction of State Senator Wayne Brant of mail and wire fraud, and bribery for soliciting a job at the School of Osteopathic Medicine. [6] As attorney, Christie won convictions or guilty pleas from over 130 public officials, without losing a single case.

Christie's service as a prosecutor had an influence in national security, when he led the team that prosecuted Hemant Lakhani, who had the desire to broker the sale of shoulder-fired missiles to shoot down American passenger jets. [7] When leaving office in December 2008 he was praised by every major newspaper in New Jersey. The Philadelphia Inquirer editorialized "Christie has already done more good for New Jersey than some previous governors." The New York Times wrote that Christie "won widespread admiration for his aggressive fight against political corruption." [8]

Even Governor Corzine, Christie's opponent in the gubernatorial election praised Christie in 2005, saying "I have supported Chris Christie as being our U.S. attorney, fought for his ability to be that, endorsed what he's doing...There have been as many Republicans as Democrats who have been brought to justice because of Chris Christie. I think he's doing a great job." [9] 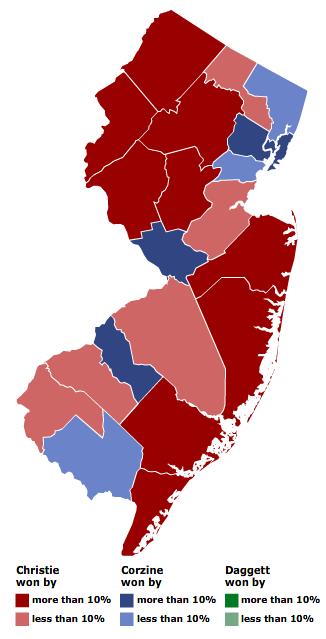 Although a Democratic state, Christie was elected while advocating the need to downsize state government and reduce property taxes. New Jersey had faced a weakened economy, high budget deficit and a high tax burden, reslting in Corzine's defeat.

In July, Christie endorsed President Obama's nomination of Sonia Sotomayor to the U.S. Supreme Court, saying "Elections have consequences. One of those consequences are judicial appointments. While Judge Sotomayor would not have been my choice, President Obama has used his opportunity to fill a seat on the Supreme Court by choosing a nominee who has more than proven her capability, competence and ability." [10]

"I believe in the sanctity, dignity and inherent value of all human life. Hearing the heartbeat of my unborn daughter 14 years ago had a profound effect on me. I am pro-life because I believe her life and the life of every child is precious." [11]

On Christie's first day as governor he signed eight executive orders and froze several government regulations. He gave a nod to Casinos, signing an order saying that their employees are essential state workers and will not have to close in any future state government shutdown, as they were in 2006. Christie also added unions to the list of groups who cannot receive state contracts of more than $17,500 if they have donated more than $300 to a campaign for governor or county political committee in the previous 18 months.[13]

In February, Christie announced that he would immediately freeze all state spending. Saying New Jersey is on the verge of bankruptcy, Christie declared a fiscal emergency, announcing drastic cuts. [14]

On March 16, 2011, Christie announced major cuts to education to help balance the budget bloat caused by years under Democratic governors. [15] The New Jersey Education Association hotly contested these vital cuts, as they would almost certainly require the firing of non-tenured teachers to balance local school budgets, a problem the teacher's union created in the first place. Recently, the cuts have been challenged by the Supreme court, despite there being no link between New Jersey's relatively large amount of educational spending and increased statewide academic success. [16]

In August 2011, Christie raised controversy by dismissing legitimate concerns voters and members of the New Jersey state legislature had raised concerning his appointment of Sohail Mohammed, a Muslim attorney with a history of defending Muslims after 9/11, as a judge on the state bench. Christie used profanity in referring to concerns that Mohammed would institute Sharia law from his position as state judge, and called citizens concerned about the Islamization of America "crazies."[17]

Governor Christie has endorsed a plan to to merge part of the University of Medicine and Dentistry of New Jersey (UMDNJ) with Rutgers University. The plan would include UMDNJ’s New Brunswick-Piscataway campus — Robert Wood Johnson Medical School, the School of Public Health and the Cancer Institute of New Jersey. The change would help raise Rutgers’ profile and draw more research dollars to the state, according to the recommendations. [18] Rutgers, one of the few state universities without its own medical school, has been lobbying for a merger since another state task force headed by former New Jersey Gov. Thomas H. Kean first suggested the idea in January 2011. The reorganization has an “aggressive” target date of July 1, 2012. By adding a medical school, Rutgers’ rank among universities in spending on research and development would rise dramatically[19]

He has also failed in getting the New Jersey Grand Prix ready for 2013, it will now be held in 2014.

Christie's administration allegedly used "thug tactics"[20] to shut down a bridge in New Jersey as retaliation against a Democrat who would not endorse Christie. The resulting traffic delays led to the death of an elderly woman and a number of investigations are ongoing. Numerous comparisons with Richard Nixon and Watergate have been drawn, even by former allies and supporters.[21][22][23]

According to RedState, "I have had Congressmen, Governors, and the staffers of Congressmen and Governors tell me horror stories about dealing with Christie’s people. All of them seem to dread it."[24] The Daily Caller elaborates: "But style aside, why should Republicans trust a candidate who has been openly antagonistic to them?"[25] Even some RINOs such as Lindsay Graham have begun to question Christie[26] although most are avoiding the issue. [27]