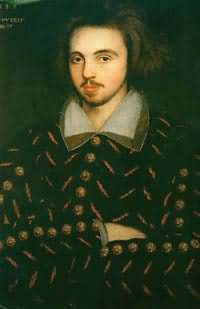 Christopher Marlowe (1564 - 1593) was an Elizabethan poet and playwright, considered by many to be second only to William Shakespeare as an Elizabethan tragedian. He is best known for The Tragical History of Doctor Faustus, a play in which Doctor Faustus makes a deal with the Devil, exchanging his soul for knowledge and power.

Marlowe was born in Canterbury to John and Katherine Marlowe,[1] and was baptized on February 26, 1564 at St George's, Canterbury, two months before the birth of Shakespeare. In 1580, he entered Corpus Christi College, Cambridge, on a scholarship awarded to students preparing for a career in the ministry. In school, Marlowe began writing plays. In 1587, he applied to do his Master of Arts. The University attempted to deny him on the grounds that he had been absent from the course previously, and associated with the seminary at Rheims, a hotbed of Catholic intrigue and propaganda against Queen Elizabeth. However, the Privy Council intervened, stating that he had been on government business, and approved his application. This incident has given rise to suggestions that he was engaged in espionage.

Before leaving Cambridge, Marlowe had already completed two plays, Tamburlaine and the tragedy of Dido, Queen of Carthage. He was one of the leading proponents of English drama at this time, employing devices such as blank verse, which would be built upon by his successors such as Shakespeare. Indeed, his play Tamburlaine the Great was so successful that he went on to write a sequel to it. Along with his plays, he wrote a number of poems, including a translation of the Amores by Ovid while still at university. Because of its lascivious subject matter and disregard for the proprieties of chastity and piety, this work was condemned and burned by the Archbishop of Canterbury.

Besides his contribution to literature, Marlowe became known for alleged blasphemy and homosexuality. At a time when both were capital offences, this brought him into conflict with the authorities.[2] He most likely avoided prison due to his government connections.[1]

In 1593 he was arrested in connection to a collection of xenophobic libels published in London, attacking Protestant refugees from the Continent. His name had been discovered in notes confiscated from the home of author Thomas Kyd, listing Marlowe as the source for some of the libels.[3]

On May 30, 1593, Marlowe met with three men involved with various illegal activities in addition to espionage, Nicholas Skeres, Ingram Frizer, and Robin Poley, at Mrs. Bull's lodging house in Deptford. Initially the meeting went well, with the men eating and socializing, however, an argument eventually broke out, supposedly about the bill. Frizer reportedly stabbed Marlowe between the eyes. Frizer was quickly pardoned after an inquest was held.[4] Some historians theorize this was an assassination, suggesting more intricate motives involving Marlowe's underground activities or his role as a social and religious dissident.