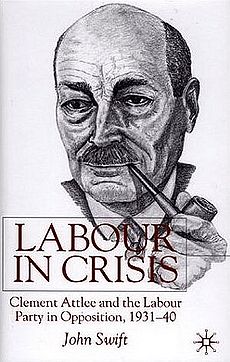 As the Second World War opened in 1939 and turned against Britain in 1940, Conservative Winston Churchill became prime minister in 1940 and Attlee--who oppposed any compromisewith Hitler--joined Churchill's wartime coalition cabinet in the #2 role as Lord Privy Seal. He continued as Labour leader in Parliament and in 1942 he became secretary of state for the dominions and deputy prime minister. He became Lord President of the Council in 1943. Atlee played a role in all the major foreign and domestic policies of the war, but left military matters to Churchill. To the astonishment of the world, Attlee defeated Churchill and the Conservatives in the general election of July 1945.

In the 1945 General Election Attlee led the Labour Party to its greatest and least expected triumph at the polls. The nation seemed ready for utopia, and Labour promised a utopian welfare state that would bring equality and prosperity to all. Attlee assembled a powerful cabinet, and as a highly efficient committee chair he achieved unity and results. The perfect referee, he played no favourites and indulged in no back-biting, yet all the while kept Churchill and the Conservatives at bay.

The story was told of an empty taxi arriving at 10 Downing Street, out of which stepped Mr Attlee. He was better liked than his program or his policies, and indeed failed to develop a public relations campaign needed to convince Britons of the need for his nationalisation program. His timing was clumsy when calling the elections in 1950 and 1951.