Committee on Foreign Investment in the United States 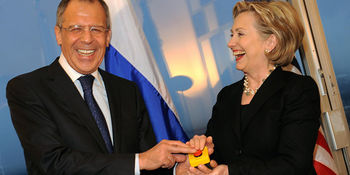 The so-called "Russian Reset" of the Obama administration was a ploy to sneak the Uranium One deal past CFIUS in which the Clinton Foundation profited immensely.

During the Obama administration CFIUS approved several controversial sales of American assets with national security implications. Among them were: Pay day: Bill Clinton in Moscow to pick up a $500,000 bribe for his wife Sec. of State Hillary Clinton's approval of the Russian purchase of Uranium One mining company.

The Department of Justice's National Security Division (NSD) reviewed this transaction in consultation with the Federal Bureau of Investigation (FBI) and CFIUS agencies. In accordance with standard procedure, NSD evaluated the factors listed in section 721 of the Defense Production Act of 1950, as amended, and ultimately communicated to CFIUS the Department's clearance of this transaction.[3]

On June 29, 2010, Bill Clinton received $500,000 for a Moscow speech to Renaissance Capital in a pay-to-play bribery scam arranged by Sec. of State Hillary Clinton for State Dept. approval of Russian purchase of Uranium One, an American mining company. Clinton was thanked personally by Russian President Vladimir Putin after the speech.[4] Renaissance Capital is a controlled entity of the Russian government. Bill & Hillary Clinton file joint taxes, are a joint economic unit, therefore any money received by one spouse is joint income to both spouses.

That same June Uranium One and Rosatom notified the Committee on Foreign Investment in the United States (CFIUS) of the Russian government's intent to acquire twenty percent of the United States’ uranium assets.[5] In July Renaissance Bank of Moscow reportedly assigned Uranium One a “buy” rating, a move that would principally benefit its Russian investors. Later the Department of Justice investigation into Prevezon Holdings determined that $13 million from the crime that Sergei Magnitsky uncovered, exposed, and was killed over went to the bank accounts of Renaissance Capital in the United Kingdom.[6]

On October 22, 2010 CFIUS certified to Congress the sale of Uranium One to Rosatom of the Russian Federation.[7] No disclosure of Russian racketeering and strong-arm tactics was made to Congress — not by Secretary Clinton, Attorney General Holder, or President Obama.

Between August 28 and September 3, 2015 an FBI agent sent notification to preserve records to the Nuclear Regulatory Commission; U.S. Dept. of Treasury; Office of Director of National Intelligence (ODNI James Clapper); National Counter Terrorism Center; and the U.S. Department of Energy (DoE),[8] the National Security Agency (NSA – Admiral Mike Rogers) the United States Secret Service (USSS);[9] the Central Intelligence Agency (CIA), Defense Intelligence Agency (DIA), and the Department of Defense in relation to Hillary Clinton email scandal.[10][11] All these are member agencies of the Committee on Foreign Investment (CFIUS) necessary to approve the Uranium One deal. During these notifications on August 31 Vadim Mikerin was allowed to plead guilty to a lesser charge.[12] On September 15, 2015 Bohai Harvest Rosemont and AVIC Auto acquired Michigan-based Henniges Automotive with a 49% share and 51% share respectively, according to a press release. Henniges specializes in anti-vibration technology with military applications. Henniges described the deal as “one of the largest acquisitions by a Chinese company of a U.S.-based automotive manufacturing company in history”.[14]

AVIC is overseen by the State-Owned Assets Supervision and Administration Commission (SASAC) of the State Council of China, the manager of all state-owned enterprises. In 2015 AVIC was 'accused of selling China’s fifth-generation jet fighter J-31, which is allegedly based on stolen technology in relation to the US made F-35.[15]

The BHR-AVIC agreement, which was awarded AVIC a Controlling Shares in Henniges, required approval from CFIUS. The Obama administration authorized the transaction, which resulted in a Senate investigation that discovered evidence of financial breaches by Hunter Biden and his uncle James Biden. According to Jack Maxey, “What is really quite disturbing is that, for example, CFIUS’s assessment of the Detroit automaker’s takeover, it becomes clear from the emails that the Chinese know they are going to pass the review round CFIUS even ahead of Hunter and Devon [Archer] and their third partner, Jimmy Bulger."[16]

This financial dealing could be a threat to the National Security of the United States by providing the CCP with the Henniges’ anti-vibration tech. Officials from the Pentagon expressed concern over this fact back in 2011.[17] Smartmatic acquired Sequoia Voting Systems in 2005.[18][19][20] Following this acquisition, Rep. Carolyn Maloney requested an investigation to determine whether the Committee on Foreign Investment in the United States (CFIUS) had followed correct processes to green-light sale of Sequoia to Smartmatic, which was described as having "possible ties to the Venezuelan government".[21] The request was made after a March 2006 following issues in Chicago and Cook County, where a percentage of the machines involved were manufactured by Sequoia, and Sequoia provided technical assistance, some by a number of Venezuelan nationals flown in for the event.[22]

Following the request, Smartmatic and Sequoia submitted a request to be reviewed by the CFIUS while also denying links to the Venezuelan government.[23] The company disclosed that it was owned by Antonio Mugica (78.8%), Alfredo Anzola (3.87%), Roger Pinate (8.47%), Jorge Massa Dustou (5.97%) and employees (2.89%).[24] Smartmatic subsequently sold Sequoia and later withdrew from Cook County in December 2006.[25]

The Wall Street Journal wrote that "Smartmatic scrapped a simple corporate structure" of being based in Boca Raton "for a far more complex arrangement" of being located in multiple locations following the Sequoia incident. Though Smartmatic has made differing statements saying that they were either American or Dutch based, the United States Department of State stated that its Venezuelan owners "remain hidden behind a web of holding companies in the Netherlands and Barbados". The New York Times states that "the role of the young Venezuelan engineers who founded Smartmatic has become less visible" and that its organization is "an elaborate web of offshore companies and foreign trusts", while BBC News states that though Smartmatic says the company was founded in the United States, "its roots are firmly anchored in (Venezuela)". Multiple sources simply state that Smartmatic is a Venezuelan company.[26] Smartmatic maintains that the holding companies in multiple countries are used for "tax efficiency".[27]

In 2008, VoterAction, an activist group based in Massachusetts and Washington State, issued a public report “SEQUOIA VOTING SYSTEMS, INC. USES VOTE-COUNTING SOFTWARE DEVELOPED, OWNED, AND LICENSED BY FOREIGN-OWNED SMARTMATIC, A COMPANY LINKED TO THE VENEZUELAN GOVERNMENT OF HUGO CHÁVEZ”, where they noted: