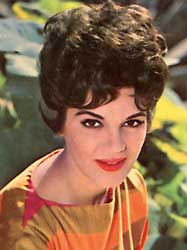 Starting out as an accordion player, she soon switched to singing under the name of Connie Francis before reaching her 20th birthday and had her first million selling single with the old standard “Who’s Sorry Now” after debuting it on American Bandstand.

It would the start of an international career that saw her rise to being one of the most popular vocalists in the world as she recorded many of her hits in nine different languages, including English, Italian, French, Spanish, German, and even Japanese.

In the late 1950s and early 1960s Connie Francis was the top female recording artist as her trademark “tearful” ballads “My Happiness”, “If I Didn’t Care”, “Among My Souvenirs”, “Mama” , “Everybody’s Somebody’s Fool”, “My Heart Has A Mind Of Its Own”, “Many Tears Ago”, “Where The Boys Are”, “Breaking In A Brand New Broken Heart”, “Together”, “When The Boy In Your Arms”, “Don’t Break The Heart That Loves You” and “Second Hand Love” were million sellers.

Rock hits “Stupid Cupid”, “Lipstick On Your Collar” and “Vacation” reached the top ten in the U.S. as Connie’s string of chart singles worldwide vaulted into the dozens.

With more than 50 albums on the best selling charts worldwide, Connie headlined in Las Vegas for several years.

In 1963 she played a Command performance before Queen Elizabeth II in Glasgow, Scotland.

Almost fifty years after first becoming a star, Connie Francis continues to perform to sold-out audiences around the world with a voice as good as it was at the start of her career.

In 2007 Connie Francis was inducted into the Hit Parade Hall of Fame.