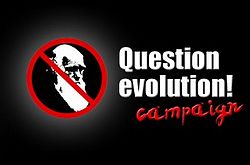 Since World War II a majority of the most prominent and vocal defenders of the theory of evolution which employs methodological naturalism have been atheists.[31] In 2011, a campaign called the Question evolution! campaign was launched by the biblical creation organization Creation Ministries International which is a worldwide "grass-roots movement to challenge the anti-Christian dogma of evolution".[32] The focus of the Question evolution! campaign is on "15 questions that evolutionists cannot satisfactorily answer."[33] The 15 questions posed to evolutionists (and undecided individuals) can be found HERE The campaign will be primarily conducted in the United States, the United Kingdom, Canada, Europe, Australia, New Zealand, Singapore and South Africa.[34]