Despite an increase in atmospheric CO2, the earth has been cooling slightly for the past decade.

Global warming is the theory that the earth is gradually warming up due to human influence. Unusual cold weather disproves the politically motivated claim by liberals that the Earth is rapidly warming.

Liberal bias is severe for this issue: the lamestream media are far more likely to report on unusually hot weather than unusually cold weather.

Many record-breaking cold temperatures and snowstorms have occurred in the last 10 years:

But, but, but global warming! Maybe the west should burn more fossil fuels to heat things up? Or maybe they can use the hot air coming out of Al Gore's mouth?

Cold waves in Peru are so bad they have to issue safety warnings about them.

Tom Rowan from the American Thinker asks, will 2011 be the year without Summer?

Thirty-two inches of snow fell on the driest place on earth, the Atacama Desert in Chile. They record less than 50mm of rain per year, 80cm of snow July 2011. [9]

Delhi has been hit by thick fog during the winter of 2011 which disrupted flights, closed schools and killed dozens of people, proving that even the Indian subcontinent is not immune to the cold wave sweeping over the globe for 2011.

Even the BBC, a liberal media bastion, is showing the pictures for all to see. Is even the mainstream media abandoning "global warming", or is the evidence too much for them to sweep under the rug any more?

Meanwhile, the communist and atheist nation of North Korea (known as The Democratic People’s Republic of Korea) is freezing their little Atheist toes off. The cold is so bad that the river that bisects Pyongyang has frozen over.

The cold appears to be universal, among industrial and non-industrial nations alike. Is it really carbon causing these events? And why are there no answers from the "global warming" community about the obvious inconsistencies in their theories?

In Mexico the unseasonably cold weather has caused significant destruction of crops in early February 2011. If it's so cold that corn can't survive, why do people keep claiming the planet is warming up?

A severe cold was expected by Dr. Ryan N. Maue to hit Russia in February 2011.

The famous Russian cold defeated Napoleon's armies, perhaps it will defeat the armies of Al Gore too?

Chaos in China as a cold snap there freezes over the highways, raises food price and causes Atheistic toes to curl. Is there any part of the world actually affected by global warming? Going simply by the law of averages, at least *somewhere* must be getting warmer.

The lamestream media publicize reports of hot weather, but that is utterly ineffective in trying to prove the existence of global warming. Warm weather does not change the fact that record cold weather disproves global warming. All the following record-breaking high temperatures would still be expected without global warming:

Random temperature fluctuations, including those above, would occur in the absence of global warming.

Often, when a climate conference is held, a new record low temperature is set for that location. Maybe God is trying to send the alarmists a message? In light of the global cold snap all around the world, perhaps the message extends beyond Al Gore? 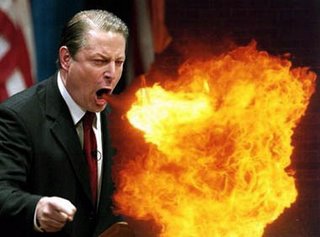