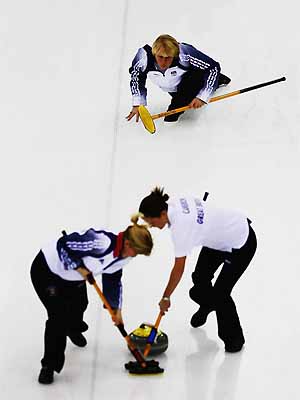 A game of curling in progress.

Curling is a winter sport, similar to bowls but played on ice (today generally at an ice rink) with the jack replaced by a circular target painted on the ice (the "house") and the bowls by polished and shaped, swiftly spinning stones that are slid towards it, generally of granite, though a variety of the game is also played with swedes (rutabagas).[1] The game is popular among people of many ages, the elderly and infirm being permitted the use of a stick to launch their stones.

The sport is played between two teams of four players, two of whom, wearing special footwear, sweep the ice ahead of the travelling stones with specially constructed brooms, to smooth or roughen the ice and thus affect the trajectory and distance they travel. Eight stones are played by each team in an end, two by each player. A game usually consists of ten ends.[2]

The expression "curling one out" comes from the sport, where it means, to determine the flavour of an end by the placement of the first stone, and thus, to determine the course of future proceedings by one's initial actions. Two main types of shot are recognised, the draw: an attempt to get the closest stone to the house, and the takeout: an attempt to remove from play the stones of the opposing team. The last stone of the end is known as the "Hammer", as it is often decisive.

Invented in medieval Scotland, it is their national Winter sport, and the Royal Caledonian Curling Club is the mother club of the sport. In 1998 it returned to the Winter Olympics, subsequently the medals for the event have been dominated by Canada, Great Britain (to date fielding all-Scottish teams), Sweden and Switzerland.