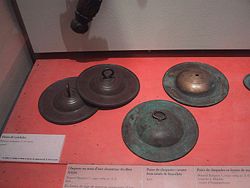 Ancient cymbals, dating to the time of the Pharaohs, from the Louvres collection

Cymbals are ancient percussion instruments that have become a necessary part of the modern symphony orchestra and are often used (using a foot pedal) by the percussionist in jazz combos.

They (it is usually “they” as there usually needs to be two of them) consist of two round slightly concave (saucer shaped) metal discs somewhere between 30 cm. (12 inches) and 65 cm. (22 inches) in diameter. Each one of a pair is designed to be of a slightly different pitch than its mate to get that all-embracing “sound” given – it can only be described as brilliant,

Just when they were developed is not known, however it had to be after the advent of the Bronze age- indeed the modern form is still made of an alloy of copper and tin. Where is also not known but they are thought to have originated somewhere in central Asia before spreading both east into China and west and south into the Indo-European lands and the ancient Middle East. They were known in the pre-classical and classical civilisations of the Middle East and Mediterranean and appear, usually as part of the array of instruments, in the Bible. The ancient cymbals were smaller than the modern versions.

They became prominent in Western Music with the infatuation with all things “Turkish” during the time of Mozart. Haydn and Beethoven used them. Hector Berlioz went overboard when he scored ten of them for his Requiem.