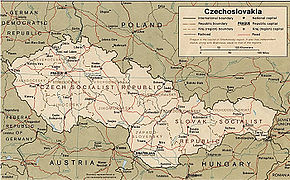 Czechoslovakia (Czech and Slovak: Československo, Česko-slovensko) was a country bordering East and West Germany, Poland, Austria and Hungary. It was later divided into the Czech Republic and the Slovak Republic of central/eastern Europe. Its capital city was Prague.

Czechoslovakia contained 127,905 square kilometers. It was divided into three major areas: Bohemia, Moravia, and Slovakia. The main river in the country was the Danube, and the main mountain range was the Carpathians.

For history before 1900 see Prague

The area was long part of the Austro-Hungarian Empire until the Empire collapsed at the end of World War I and the new state was born with Tomáš Masaryk (1850-1937) the first president, serving 1918-1935. He was succeeded by his close ally Eduard Benes (1884-1948).

The roots of Czech nationalism go back to the 19th century, when philologists and educators, influenced by Romanticism, promoted the Czech language and pride in the Czech nation. Nationalism became a mass movement in the last half of the 19th century. Taking advantage of the opportunities for limited participation in political life available under Austrian rule, Czech leaders such as historian František Palacký (1798-1878), founded numerous patriotic, self-help organizations that provided a chance for many of their compatriots to participate in communal life even prior to independence. At first Palacky supported Austro-Slavism and worked for a reorganized, federalized, and Slavic-dominated Austrian Empire to protect Slavs against Russian and German threats. The failure of the Revolution of 1848, however, crushed his hopes for Austro-Slavism. Palacky then turned gradually toward Russia and Russian-led Pan-Slavism. An advocate of democratic reform and Czech autonomy within Austria-Hungary, Masaryk was twice elected (1891, 1907) to the Austrian parliament. In 1900 he founded the Progressive (or Realist) party. With the outbreak of World War I, however, Masaryk began working for Czech independence in union with Slovakia. With colleagues Eduard Benes and Milan Stefanik, he visited several Western nations and won support from influential publicists.[1]

Bohemia and Moravia, under Austrian rule, were Czech-speaking major industrial centers, while Slovakia, which was part of Hungary, was an undeveloped agrarian region. Conditions were much better for the development of a mass national movement in the Czech lands than in Slovakia. Nevertheless, the two movements realized they were too small to go it alone, so they joined to create the new country.

While the Czechs were second only to the Germans of the Habsburg Empire in social, economic, and cultural development, they were second class subjects and had little voice. Bohemian Germans (later called Sudeten Germans) opposed Czech and Slovak nationalism and looked to Imperial Germany for leadership. Pan-Slavism emerged, as some Czechs and Slovaks turned to Russia, but most preferred the easy-going Catholic Habsburgs in Vienna to the autocratic Orthodox Romanovs in St. Petersburg. No revolution was in the making when World War I broke out in 1914. Nationalism came under the leadership of Thomas G. Masaryk and his supporters in France and the United States. The Allies only reluctantly promised an independent new nation in 1917 after failing to sever the Habsburg Empire from its powerful ally, Germany.

The period between the two world wars saw the flowering of democracy in Czechoslovakia. Of all the new states established in central Europe after 1918, only Czechoslovakia preserved a democratic government until it was ended by outside forces. The persistence of democracy in part reflected the fact that the preconditions for maintaining democracy were better in Czechoslovakia than elsewhere in the region. Thus, despite regional disparities, its level of development was much higher than that of neighboring states. The population was by and large literate, and contained fewer alienated groups. The impact of these conditions was augmented by political values of Czechoslovakia's leaders and the policies they adopted. Under Tomas Masaryk Czech and Slovak politicians promoted progressive social and economic conditions that served to diffuse discontent.

Foreign minister Benes became the prime architect of the Czechoslovak-Romanian-Yugoslav alliance (the "Little Entente", 1921–38) directed against Hungarian attempts to reclaim lost areas with Hungarian majorities. Benes worked closely with France. By a major blunder in 1918 the nation included "Sudetenland" an outer fringe region that comprised 3 million Germans, who wanted no part in the new country and who were treated as second class citizens by the new government in Prague. The original idea was that the Sudetenland had hilly areas that made feasible a military defense; far more dangerous was the German element, which after 1933 became allied with the Nazis in Germany. Czechoslovakia's great fortune was in having talented political leaders willing to compromise within the delicate balance of coalition government. Even a stabilized economy by 1937 could not help Czechoslovakia withstand Hitler.

In 1938 Hitler demanded control of the Sudetenland, and the major powers at the Munich Conference gave it to them to avoid a world war, ignoring the military alliance Czechoslovakia had with France. In 1939 the Nazis took over the rest of the country, split it apart, and ruled cruelly during World War II. Growing Slovak inferiority complex hostile to the more numerous Czech population weakened Czechoslovakia in the late 1930s. Many Slovaks supported an extreme nationalist movement and welcomed the puppet Slovak state set up under Hitler's control in 1939.

With no army, the area became an industrial and agricultural resource for the Nazis; relatively few civilians were killed in the war, but the sense of bitterness over the betrayal at Munich persisted.

Benes, the pre-occupation president who had led the Czechoslovak government in exile from London resumed his position as president, 1945-48. The Germans were all expelled and went to West Germany—which proved their escape from Communism. After a three-year struggle with the Communists, who had control of the media and national police, Benes again capitulated in order to avoid a bloodbath. Soviet influence was exerted through the Red Army; Stalin refused to allow the country to join the Marshall Plan. Stalin had his own plan, In Feb. 1948 the local Communists seized control. The old elite was exiled, imprisoned or killed the patriots and turned the country into a powerless satellite of the Soviet Union. They kept filled 422 prisons and concentration camps with dissidents. Western outrage as the Communist takeover was a major factor that caused the Cold War.[2]

The Reds followed the Soviet model for their economy, which marked a step backward. No other East European country was to be so nationalized in agriculture and industry. Trade patterns changed; 70% of the trade was with the Soviet bloc and only 19% was with the West. The economic reforms of the Prague Spring of 1968 were thoroughly dismantled after the Soviet intervention.

"Prague Spring" was a liberalization movement seeking to reform the Czechoslovak government on principles of freedom of speech and religion. The "Prague Spring" was a triumph of the democratization movement, a spontaneous manifestation of the tremendous potential energy of the alliance of workers with intellectuals, a drive of the antibureaucratic and antitotalitarian opposition. It was a rapid sequence of events historically unprecedented in Eastern Europe. The local Communist Party could not contain the movement within the narrow institutional limits of Stalinism.

On August 21, 1968 the Soviet Union and its satellite Warsaw Pact allies invaded Czechoslovakia to crush Prague Spring, and execute its leaders.

The invasion resembled the defeat of Protestant Bohemia at the battle of White Mountain in 1620, when the state was incorporated into the Habsburg Empire under terms dictated by the victorious Austrians.

Moscow saw its empire teetering and desperately needed to control the unpredictable course of events in its satellite. East German and Polish Communist leaders warned that they would not be able to guarantee stability in their countries if order was not restored by force in Czechoslovakia. Like Benes in 1938 and 1948, the Czech leaders did not resist. The immediate impact was adverse for the Soviet Union's international position; it strengthened the resolve of NATO. For the Italian, French, and Spanish Communist parties, Soviet intervention signaled the end of proletarian internationalism and the inspiration for pluralistic socialism.

In 1989, as the Soviet Empire collapsed, Czechoslovakia staged the Velvet Revolution, ousted the Communists and became democratic again under the leadership of Czech playwright Vaclav Havel (born 1936). On January 1, 1993 the country peacefully split into the Czech Republic and Slovakia. Both are now NATO members.

Josef Korbel (1909–77) was a diplomat[3] who served successively as Jan Masaryk's personal secretary, head of the broadcasting department of the Czech government-in-exile in London, youngest Czech ambassador at age 36 to postwar Yugoslavia, and chairman of the UN Commission on India and Pakistan which settled the Kashmir crisis. Exiled after the 1948 Communist coup d'état, Korbel began a second distinguished career in academia, teaching at the University of Denver and publishing numerous works on political and diplomatic history and explaining the failures of Communism. His shaped two secretaries of state—his PhD student Condoleezza Rice (b. 1954) and his daughter Madelaine Korbel Albright (b. 1937)

The land of Czechoslovakia contained many different religions affiliations. The main ones were: Roman Catholic Church, Czechoslovak National Church, Slovak Evangelical Church, Evangelical Church of Czech Brethren, and Uniate Church. The majority of inhabitants were Roman Catholic. There were also a small number of Jews. After the communist takeover religion was suppressed, even though the constitution allowed freedom of religion. Between 1948 and 1968, the number of catholic priests declined by half, and half the remaining clergy were over sixty years of age.[4] The communist governments promoted atheism through the use of harassment and propaganda, and they also promoted it in schools by ordering teachers to attack religion.

In 1987 Czechs represented 63% of population and Slovaks 31%, with Hungarian and other minorities at 5%. In 1986, the population was 15.5 million with a low a population growth rate of 0.3. The life expectancy in 1984 was sixty-seven years for men and seventy-four years for women. The major cities in 1986 were:

Two-thirds of the people lived in cities and towns. There were two official languages, Czech and Slovak, but the old sense of Slovak inferiority never vanished and led to the split shortly after the nation became free of Communism.