Difference between revisions of "David Silverman"

David Silverman took feminist Rebecca Watson off the speakers list for the Reason Rally after Richard Dawkins objected to her speaking at the event.[1] See: Elevatorgate

David Silverman served as the President of the American Atheists organization.[2] David Silverman is currently a full-time consultant for the Conru Foundation.[3] According to their mission statement, “The Conru Foundation supports the protection of modern life – free speech, civil discourse, ecological sustainability, compassionate capitalism, elevation of the arts, evidence-based reasoning, and equal treatment for all.” Recently, the Conru Foundation made a supportive post on their Facebook page for Dave Rubin and Ben Shapiro.[4]

In 2018, Silverman was fired from the American Atheists organization after allegations of financial conflicts and sexual assault.[6] Nick Fish, the new president of American Atheists, indicated that Silverman's termination was not over sexual allegations, but as a result of a "loss of confidence" stemming from violations of internal policies on staff management, conflicts of interest, and their general code of conduct.[7] Silverman, through his lawyer, denies any wrongdoing and indicates he has never had a non-consensual sexual encounter.[8] In 2019, atheists PZ Myers and Stephanie Zvan indicate that Silverman's attempts to improve his public image have failed.[9][10] In his book, Fighting God, Silverman indicates that he is a “proud feminist.” (See also: Atheism and sexism and Atheism and the Me Too Movement).[11] See also: Firing of David Silverman from the American Atheists organization

Silverman claimed that he had an open relationship with his Jewish and theist wife, but later admitted he lied about that his matter and cheated on her.[12] See also: Prominent atheists and adultery

On October 2, 2019, Silverman indicated the experience of being accused of sexual harassment, being fired from the American Atheist organization and losing many of his former atheist friends caused him a "horrific level of pain" that "damaged" him and that he now has textbook symptoms of Post-Traumatic Stress Disorder.[13] In addition, he had suicidal thoughts.[14] Furthermore, he said he now takes medication, and he is still a damaged person.[15] See also: Atheism and mental toughness

Silverman has filed a defamation lawsuit against the women who accused him of sexual harassment, BuzzFeed who reported the news story, and the American Atheists organization.[16] On December 9, 2019, David Silverman's attorney withdrew from being his lawyer in his suit against American Atheists and Silverman will be acting as his own attorney.[17] See also: Atheist lawsuits

Silverman now considers himself an ex-progressive who is now a second-wave feminist and not a third-wave feminist.[18] Silverman recently appeared on the YouTube channel of Carl Benjamin, an atheist who is ant-feminist. PZ Myers indicated the video declared that "After falling victim to the #MeToo movement, ex-leader of American Atheists David Silverman had his life totally destroyed by false allegations made by feminists in the atheist movement."[19] Silverman's worldview is atheistic and center-left politically. Recently, atheistic, center-left/liberal YouTube videos are seeing significantly less viewership (See: YouTube videos with an atheistic, classical liberalism, political viewpoint see a decline from 2017 to present).

Concerning Silverman's scandals and subsequent firing, atheist and feminist PZ Myers said, "It's a terrible day for organized atheism."[20] Myers spent $1200 for a lifetime membership with American Atheists because he was impressed by the way Silverman went after the “anti-feminist” atheists.[21] See also: Decline of the atheist movement

Silverman identifies as a firebrand atheist and defines firebrand atheism as vocally "attacking" humans' "silly" religious beliefs without attacking the individuals themselves.[22]

Silverman served as the New Jersey State Director of American Atheists and after four years of service he become National Spokesperson for the American Atheists Organization. [23] David Silverman holds degrees in Marketing and Computer Science.[24]

Firing of David Silverman from the American Atheists organization

A Brief Timeline of Events in the David Silverman Firing In October 2019, he was hired to be the Executive Director of Atheist Alliance International (AAI)[25] In December 2019, the atheist blogger David G. McAfee reported that David Silverman has been suspended by AAI pending an investigation into an alleged inappropriate touching incident.[26] See: Atheist Alliance International's hiring of David Silverman

David Silverman resigned his position as Executive Director of Atheist Alliance International in December of 2019.[27][28][29]

There were atheist feminists/progressive atheists attempting to get Atheist Alliance International to fire Silverman.[31] David Silverman indicated that Secular Woman and its president Monette Richards were trying to get the United Nations to revoke AAI's special consultative status with the UN in order to punish AAI for hiring Silverman.[32]

According to Silverman, he became an atheist at the age of six.[34] According to the MasterMedia Speakers Bureau website, Silverman is married to a religious Jewish woman and he has a daughter".[35] David Silverman claimed that he had an open relationship with his Jewish and theist wife, but later admitted he lied about this matter and cheated on her.[36]

In an interview, Silverman told atheist David Smalley that he suffers from depression and that he doubts his self-worth.[37]

After Silverman was terminated from his job at American Atheists, The Washington Post declared concerning Silverman, "Since then, he has lost his job, longtime friends, sleep and weight."[38]

An article by Sarah posted at Skepchick about a conversation between Richard Dawkins and David Silverman which took place during the planning phase of the Reason Rally:

Silverman intentionally exaggerating the number of atheists in the USA

In 2012, the organization PolitiFact Rhode Island accused David Silverman of wildly exaggerating the number of atheists in America by attempting to included the Unaffiliated (also called Nones) who made up about 15% of the United States population at the time (despite the fact that only 15 percent of "nones" identify as atheists) and by also attempting to lump agnostics with the atheist population.[40][41]

The 2008 American Religious Identification Survey (ARIS) found that only 0.7% of U.S. adults identified as atheist, but at the same time 2.3% said there is no such thing as a god.[43] The reluctance of Americans to self-identify as atheists is likely due to the American public's low opinion of atheists (See: Americans have a low opinion of atheists).

The atheist Vlad Chituc wrote at the University of Southern California's Religious Dispatches:

Despite the many shortcomings of the book, David Silverman said of his book Fighting God: "...I am very proud of it as you can tell." (See: Atheism and arrogance).[45][46]

The American Atheists organization sponsored an aggressive and controversial billboard and an interview with Fox News occurred as a result of the billboard VIDEO. As noted above, Silverman has a degree in marketing, but despite his degree in marketing, according to fellow atheist and evolutionist PZ Myers, Silverman was stuck defending a "badly designed, ugly" sign.[47]

See also: Decline of the atheist movement and Atheists and the endurance of religion and Desecularization and David Silverman's speech at the 2018 American Atheists convention 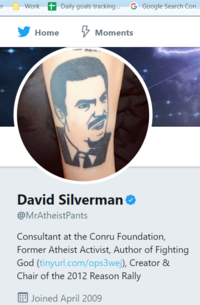 In 2020, David Silverman, the ex-president of the American Atheists organization, declares he is a former atheist activist via his Twitter account.