Diego Rivera y Barrientos (Guanajuato 1886 – Mexico City 1957) was a Mexican Muralist painter and draughtsman. Along with David Alfaro Siqueiros and Jose Clemente Orozco, Rivera was one of the most important artists in the Mexican mural movement. [1] He won international acclaim for his vast public wall paintings, in which he created a new iconography based on socialist ideas and exalted the indigenous and popular heritage in Mexican culture. He also executed large quantities of easel paintings and graphic work. [2] Rivera was born in Guanajuato, Mexico; his mother, a doctor, was a Converso Jew, and he publicly announced his Jewish roots: "My Jewishness is the dominant element in my life," Rivera wrote in 1935. "From this has come my sympathy with the downtrodden masses which motivates all my work." [3]

Rivera's talent for historical murals and his tributes to earthy folk traditions made him one of the most influential artists in the Americas and one of Mexico's most beloved painters. The virtual Diego Rivera Web Museum 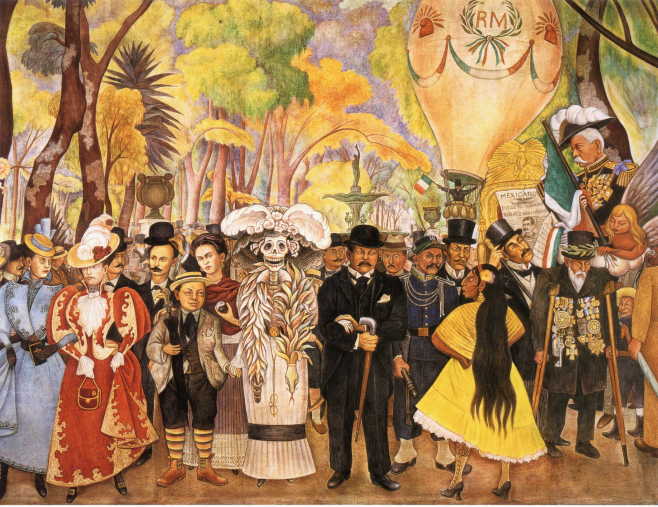 Detail of mural, Dream of a Sunday Afternoon in Alameda Park, 1948. Diego Rivera studied in the San Carlos Academy from 1896 to 1905 (starting when he was 10 years old); he had as teachers some of the most important painting figures like Santiago Rebull, José María Velasco, Félix Parra, José Salomé Pina, Andrés Ríos, Julio Ruelas, Antonio Fabrés and Germán Gedovius; his travels to Europe enabled him to come into contact with Renaissance, Cubist and avant-garde works. His work shows study and analysis of neoimpressionism, Cézannism, Fauvism and Cubism. He experimented with oils, pastels, watercolors, fresco, encaustic and tempera on cloth, cardboard, paper and pressed cork. His cubist works are not well known, like El guerrillero, 1915 and Maternidad, 1916. Rivera spent five years producing cubist paintings (1913 - 1917). [4]

Diego Rivera rebelled against the traditional school of painting and developed a style that combined historical, social, and political ideas. His great body of work reflects cultural changes taking place in Mexico and around the world during the turbulent twentieth century. [5] Rivera was husband of artist Frida Kahlo and was an associate of Leon Trotsky during Trotsky's last days in Mexico (In 1929, Rivera was expelled from the Mexican Communist Party). Still a socialist, in 1933 he attempted to insert a portrait of Lenin into a mural commissioned by Nelson Rockefeller, called "Man at the Crossroads". Later, Rockefeller ordered it to be painted over, due to some pro-socialist imagery in the work.[1] A duplicate original mural is now in Mexico City's The Fine Arts Palace (although at a smaller scale), "Man, Controller of the Universe", 1934. .[2]

Rivera was considered perhaps the greatest Mexican painter of the 20th century. He felt that the large format of murals and their accessibility to the public helped bring art and the themes of history and progress to the common people. The University of California, Berkeley.

At the Detroit Institute of Arts, the museum's central courtyard is decorated with a series of 27 murals by the Mexican painter Diego Rivera that depict the automobile industry.

The north wall of Diego Rivera's "Detroit Industry" mural, at the Detroit Institute of Arts.

Diego Rivera was the subject of MoMA’s second monographic exhibition (the first was Henri Matisse), which set new attendance records in its five-week run from December 22, 1931, to January 27, 1932... "Agrarian Leader Zapata", 1931, is an icon in the MoMA’s collection... A new exhibition at the MoMA (November 13, 2011–May 14, 2012) has brought together key works made for Rivera’s 1931 exhibition, presenting them at MoMA for the first time in nearly 80 years. Along with mural panels, the show include full-scale drawings, smaller working drawings, archival materials related to the commission and production of these works, and designs for Rivera’s famous Rockefeller Center mural. [6] In 1937, the Dewey Commission headed by American educator John Dewey was assembled in the home of Diego Rivera to respond to charges of Marxist deviationism leveled against the Soviet exile Leon Trotsky.[3] This was a formal response to the Stalinist show trials during the Great Purges.[4] Trotsky was found guilty in absentia in Moscow and later assassinated by KGB agents in Mexico City.

Mural at the Detroit Institute of Arts (detail)