Difference between revisions of "Dome of the Rock"

The Dome of the Rock[1] is an Islamic shrine in Jerusalem. It is the high point of the Temple Mount, biblical Mount Moriah. Muhammed said that in a dream he ascended to "heaven" from the Temple Mount, which Muslims refer to as the "Noble Sanctuary."[2]

Muslim authorities do not accept the tradition that Mohammad ascended from the Rock specifically.[3] The Temple Mount is Islam's third holiest site. The dome was built in 691, making it one of the oldest examples of notable Islamic architecture.

In Jewish tradition, the rock under the dome is identified with the foundation stone on which the Ark of Covenant rested at the Temple.[4] The foundation stone is where Abraham offered up his son Isaac,[5] and it is the part of the world that came into being first during creation.[6]

The base of the Dome is an octogon. The Byzantine Church of Mary's Rock in Jerusalem has been suggested as an inspiration for this unusual shape.

Relationship to the Temple 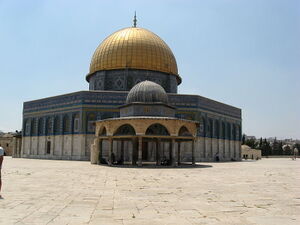 The generally accepted view is that the Temple was where the Dome now stands. This central location theory was outlined by Rabbi David ben Zimra (“Radbaz” [1461–1571]). In modern times, this theory is identified with architect Leen Ritmeyer. The Rock is identified with the Foundation Stone, which was in an area of the Temple called the Holy of Holies.

One difficulty with this view is that the rock housed under the Dome is 58 by 51 feet. Yet the Holy of Holies was only 20 by 20 cubits, or 30 by 30 feet. The Foundation Stone was a platform that rose "three fingers" above the Temple floor, according to the Mishna.[7] The Rock is 5 foot, 9 inches above the floor of the shrine. Furthermore, the top of the Rock appears to have been quarried at some point, suggesting that it was once even higher.

The northern location theory of physicist Asher Kaufman places the Temple north of the Dome, with the Holy of Holies located at what is now the Shrine of the Spirits. This is due west of the blocked Golden Gate, a subject of messianic prophesy.[8] A review in Biblical Archaeological Review complained that Kaufman's "reconstruction of the Inner and Outer Courts of the Temple [are] geographically and physically untenable."[9]

Architect Tuvia Sagiv has proposed a southern location theory that places the Holy of Holies at the site of Al Kas fountain, south of the Dome. Sagiv suggests that Hadrian's Jerusalem temple followed the plan of another temple built by Hadrian in Baalbek, Lebanon. In this view, the Dome was built on the ruins of the hexagonal forecourt of the classical temple.[10]

Meteorologist Ernest Martin argues that the Temple was not on the Temple Mount at all, but rather in the City of David, which is located in a valley just south of the Temple Mount.[11] This theory ignores numerous Bible verses that specify that the Temple was on a mountaintop. For example, 2 Chronicles refers to, "the altars that he had built on the mountain of the house of the LORD and in Jerusalem,"[12] while Micah says, "It shall come to pass in the latter days that the mountain of the house of the LORD shall be established as the highest of the mountains, and it shall be lifted up above the hills; and peoples shall flow to it."[13]

The dispute is not only about archeology and religion, but also politics. While the central location theory upholds rabbinic orthodoxy, Kaufman, Sagiv, and Martin want to rebuild the Temple and have selected locations where this might be possible.

After the Romans destroyed the Second Temple in AD 70, Jerusalem was rebuilt as a Roman city called Aelia Capitolina. Emperor Hadrian landscaped the Temple Mount and built a temple to Jupiter on the site in 135. In 325, Emperor Constantine tore down this temple.[14]

The Bordeaux pilgrim visited the site in 333. Interior of the Dome

According to legend, when the first Muslim conquerors took Jerusalem, they approached the Temple Mount. There, the conqueror Umar (or Omar) called the Christian Patriarch Sophronius of the city before him to answer for the derelict state of the holy site. Insisting that such a site, sacred to all three religions, deserved respect, Umar insisted that the patriarch himself begin cleaning the mount.

The dome was built shortly thereafter, first in a primitive, wooden state from 687 to 691 by Caliph Abd al-Malik ibn Marwān as a placeholder, and in its final spectacular version somewhat later. It suffered from earthquakes in 746, 1033, and 1927. This shrine was covered by a lead dome from 691 until it was replaced with a gold-colored covering in 1965. Because of rust, the anodized aluminum cover was again replaced in 1993 with a gold covering.[16]

The association between the Dome of the Rock and the Jewish Temple can be traced to medieval times. During the Crusades, the Knights Templar called the Dome the "Temple of God" and used it as their headquarters. The Temple proper was 400 by 400 cubics, according to Josephus. A cubic was about 0.44 meters. Thus the sanctified area is just a small portion of the Temple Mount.

Since at least 1600, Jewish religious leaders have held that Jews are not allowed enter any part of the Temple Mount. Instead, modern Jews pray at the Western Wall. Since the locations of forbidden areas, such as the Rampart or the Court of Women, are no longer known, there is a risk that someone who enters the Temple Mount will trespass into them.[19]

The Waqf, a Muslim group financed by the Jordanian government, manages the Temple Mount-Haram al-Sharif and consequently the Dome of the Rock.