This article is a list of achievements by U.S. President Donald Trump, his administration, and Congress related to his foreign policy in 2019.

By 2019, the Trump Administration exercised global leadership in foreign policy matters and was unafraid to take bold actions, as seen in several decisions made at the beginning of that year.[1] The administration's conservative and nationalist policies had diverged significantly from the liberal and globalist policies of many European countries.[2] President Trump successfully secured the release of numerous Americans imprisoned overseas.[3] According to the Pew Research Center in early 2019, "concern" by the world's population over the United States' "power and influence" increased from 25% in 2013 to 45%.[4] By 2019, Vice President Mike Pence had successfully worked to advance conservative foreign policy priorities.[5] The State Department deep state, however, continued working against President Trump's nationalist and America First policies.[6]

Rather than focusing on climate change like other world leaders, President Trump advocated for religious freedom at the UN, September 23, 2019

The Trump Administration took actions related to the United Nations and similar international organizations, and it also took some steps to restore American national sovereignty: 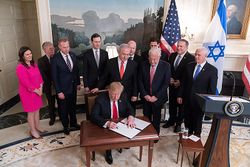 The Trump Administration continued challenging China,[98][99] and the establishment adopted his policies toward to country.[100] U.S. relations with Taiwan strengthened,[101] and the U.S. military refocused some of its operations to counter China.[102]

The Trump Administration took actions related to North Korea. While continuing to take a strong stance against the country, he made a serious effort to pursue peace.[129]

The Trump Administration continued taking actions against Iran.[141] By March 2019, it had crippled Iran's ability to ship oil to Syria,[142] and it had deeply hurt Iran's economy.[143] The Trump Administration also focused on countering Hezbollah.[144] Despite these strong actions, President Trump resisted pressure by neocons and other interventionists to overreact to Iranian aggression and start a war with the Islamic republic,[145] and he called on other countries to take greater responsibility in the region.[146]