This article is a list of achievements by U.S. President Donald Trump, his administration, and Congress related to immigration, illegal immigration, and border security in 2019.

By early 2019, the Trump Administration had made much progress securing border wall funding,[1] and the Defense Department played an important role in securing the border.[2] The DHS increased its presence on the southern border even when migrant apprehensions fell somewhat.[3] The Trump Administration also kept its promise to lower refugee admissions[4] and made major reforms to its refugee admissions program.[5] The administration increased its scrutiny of foreign worker petitions,[6] and it took some steps to enforce laws against visa overstays[7] and the illegal hiring of foreigners over U.S. citizens.[8] The USCIS worked to implement President Trump's agenda,[9] and in June 2019, the president appointed Ken Cuccinelli, a strong conservative, to lead the agency.[10] Because of the Trump Administration's tough immigration policies, thousands of asylum seekers gave up trying to enter the United States.[11] Because of the lower number of illegal migrants in the country, the farm industry was forced to either raise wages, automate its workforce, or hire legal workers.[12] The number of illegal aliens applying for "voluntary departure" significantly increased.[13] 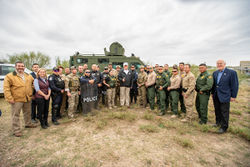 Another image of President Trump at the border in California, April 2019

The Trump Administration continued admitting a record low number of refugees in 2019.[32] Because of the administration's policies, the U.S. ended its status as the most common destination for refugees, handing that designation to Canada and the EU.[33] By June 2019, President Trump had reduced the number of Syrian refugee admissions by 62% compared to the last two years of the Obama Administration,[34] and the number of Christian refugees reached 80% of the total number admitted.[35]