East Turkestan (sometimes Xinjiang) is a country currently under the occupation of People's Republic of China. [1] The main inhabitants of East Turkestan are the Uighurs among other Turkic peoples such as Kazakhs, Kirghiz, Uzbek and Tatars. Over 3 million native Uyghurs are held in Chinese Communist gulags.[2]

East Turkestan was an independent country until the year 1949, when it was invaded by the Communist Chinese. From the years 1951-1959, there were over 14 major armed rebellions against the Chinese occupation. The largest armed rebellion took place in Khotan from December 28-31, 1954. 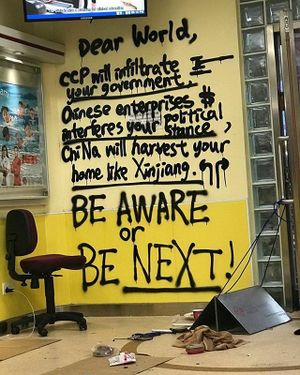 Grafetti from the late November 2019 Hong Kong democracy protests reads: "Dear World, CCP will infiltrate your government, Chinese enterprises $ interfere your political stance, China will harvest your home like Xinjiang. BE AWARE or BE NEXT!"[3]

Since an outbreak of demonstrations and ethnic unrest in 2009 and clashes involving Uyghurs and Chinese occupation personnel in East Turkestan that spiked between 2013 and 2015, Chinese Communist Party leaders have sought to control it through more intensive security measures aimed at combatting “terrorism, separatism and religious extremism.” According to CCP official data, criminal arrests in occupied East Turkestan increased by over 300% between 2015 and 2020 compared to the previous five years.

In tandem with a new national religious policy, also referred to as “Sinicization,” XUAR authorities have instituted measures to assimilate Uyghurs into Han Chinese society and reduce the influences of Uyghur, Islamic, and Arabic cultures and languages. The XUAR government enacted a law in 2017 that prohibits “expressions of extremification,” and placed restrictions, often imposed arbitrarily, upon face veils, beards and other grooming, some traditional Uyghur customs including wedding and funeral rituals, and halal food practices. Local authorities reportedly also have banned some Islamic names for children. Thousands of mosques in occupied East Turkestan have been demolished as part of what the government calls a “mosque rectification” campaign; others have been “Sinicized”—minarets have been taken down, onion domes have been replaced by traditional Chinese roofs, and Islamic motifs and Arabic writings have been removed.

Some Uyghurs—estimates range from hundreds to thousands—have fled religious restrictions and persecution in China during the 2010s. Many have migrated through Southeast Asia to Turkey, which has a large Uyghur community.

By contrast, the Hui, another Muslim minority group in China who number around 11 million, largely have practiced their faith with less government interference. The Hui are more geographically dispersed and culturally assimilated than the Uyghurs, are generally physically indistinguishable from Hans, and do not speak a non-Chinese language.

Many experts attribute the proliferation and intensification of security measures in the region to new national and provincial counterterrorism laws and to the leadership of Chen Quanguo, the former Party Secretary of Tibet, who was appointed Party Secretary of the XUAR in 2016.

Recent security measures include the following: A transport of Uighur prisoners at a CCP concentration camp in Xinjiang.[5]

Natural population growth in Xinjiang has declined dramatically; growth rates fell by 84 percent in the two largest Uyghur prefectures between 2015 and 2018, and declined further in several minority regions in 2019. For 2020, one Uyghur region set an unprecedented near-zero birth rate target: a mere 1.05 per mille, compared to 19.66 per mille in 2018. This was intended to be achieved through “family planning work.”

Documents from 2019 reveal plans for a campaign of mass female sterilization in rural Uyghur regions, targeting 14 and 34 percent of all married women of childbearing age in two Uyghur counties that year. This project targeted all of southern Xinjiang, and continued in 2020 with increased funding. This campaign likely aims to sterilize rural minority women with three or more children, as well as some with two children—equivalent to at least 20 percent of all childbearing-age women. Budget figures indicate that this project had sufficient funding for performing hundreds of thousands of tubal ligation sterilization procedures in 2019 and 2020, with at least one region receiving additional central government funding. In 2018, a Uyghur prefecture openly set a goal of leading its rural populations to accept widespread sterilization surgery.

By 2019, XAUR planned to subject at least 80 percent of women of childbearing age in the rural southern four minority prefectures to intrusive birth prevention surgeries (IUDs or sterilizations), with actual shares likely being much higher. In 2018, 80 percent of all net added IUD placements in China (calculated as placements minus removals) were performed in Xinjiang, despite the fact that the region only makes up 1.8 percent of the PRC’s population.

Shares of women aged 18 to 49 who were either widowed or in menopause have more than doubled since the onset of the internment campaign in one particular Uyghur region. These are potential proxy indicators for unnatural deaths (possibly of interned husbands), and/or of injections given in internment that can cause temporary or permanent loss of menstrual cycles.

Between 2015 and 2018, about 860,000 ethnic Han residents left Xinjiang, while up to 2 million new residents were added to Xinjiang’s Han majority regions. Also, population growth rates in a Uyghur region where Han constitute the majority were nearly 8 times higher than in the surrounding rural Uyghur regions (in 2018). These figures raise concerns that Beijing is doubling down on a policy of Han settler colonialism.

These findings provide the strongest evidence yet that Beijing’s policies in Xinjiang meet one of the genocide criteria cited in the U.N. Convention on the Prevention and Punishment of the Crime of Genocide, namely that of Section D of Article II: “imposing measures intended to prevent births within the [targeted] group” (United Nations, December 9, 1948).[6]