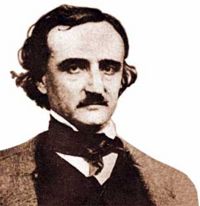 Edgar Allan Poe (1809-1849) was an American poet, editor and author of short stories, most famous for his dark and morbid themes, although he also wrote some lesser known light-hearted works. Among his most famous and haunting works were "The Tell-Tale Heart" (1843) and "The Raven" (1845).

Poe considered himself a Christian. His views at the time he wrote his non-fiction treatise of science and religion, "Eureka", believed in a Creator but rejected that God was “omnipotent, omniscient,” preferring instead to view God and Nature as distinct.[1]

Poe was born in Boston in 1809, and was raised in Richmond, Virginia, after his mother's death in 1811. He was educated in England and in Virginia.

In 1836, he married his first cousin Virginia Clemm, three months before her 14th birthday. Poe was an alcoholic, and drank increasingly after his wife's death in 1847. In 1849, he was found on the streets in Baltimore and died soon after. The cause of Poe's death remains unknown.[2]

Poe was one of 102 Americans to be inducted into the Hall of Fame for Great Americans.

Poe is buried in Baltimore. For six decades, on Poe's birthday, a mysterious figure has appeared at Poe's grave, leaving flowers and a bottle of cognac. It is believed that in 1998, the original "donor" had passed on, and the tradition was taken over by his son. Many in Baltimore are aghast at the thought of the identity of the man ever being revealed.[3] The visitor failed to appear in either 2010 or 2011.

Poe's works had a mixed, but largely negative, reception among literary circles during his life, but they were to have great influence on writers, particularly European writers, after his death. He remains one of the first American writers to be widely admired by European audiences, who in the 19th century had little respect for American literature.

But because of his use of imagination and his diving into the grotesque, the absurd, and darkness of dreams, he is linked with the creation of the surrealism movement and, from his staunch ideas on writing, inspired whole new genres to acquire the fame and fortune that eluded him. The famous pseudo-science fiction writer Jules Verne lists Poe as his main inspiration, as have other foreign writers, including Jorge Luis Borges, Franz Kafka, and the contemporary author Carlos Fuentes. As American author Joyce Carol Oates put it, "Who has not been influenced by Poe?"[4]

His short story "The Murders in the Rue Morgue" (1841), and its sequels, are considered to be the first detective stories,[5][6] and were a major influence on Arthur Conan Doyle's Sherlock Holmes stories.

"The Gold-Bug" (1843) is an imaginative tale which gives an example of elementary cryptanalysis (code-breaking), as well as being one of the earliest examples of pirate-related fiction, forty years before Robert Louis Stevenson popularised the genre with Treasure Island.