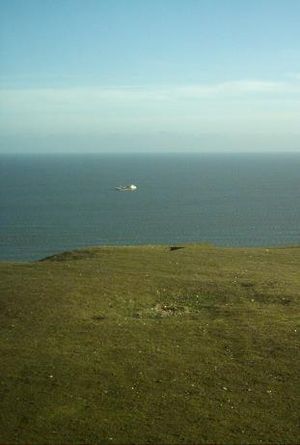 The English Channel from the Cliff top at Tennyson Down, the Isle of Wight

The English Channel (Spanish: El Canal de la Mancha) is the name of the shallow extension of the Atlantic Ocean which separates the Island of Great Britain from France where it is referred to as 'La Manche' (meaning the sleeve). It is narrowest in the east at the Straits of Dover, where it joins the North Sea. At this point, the UK and France are just 24 miles apart, and on a clear day you can see right across.

It is the busiest shipping route in the world, and much of the sea cargo bound to and from Western and Northern Europe pass through the channel, as well as regular ferry links between the British Isles and the mainland.

In 1994, the 31-mile Channel Tunnel, connecting England and France by rail beneath the Channel, was completed. There had been a number of previous failed attempts to build such a tunnel throughout history.

The Channel Islands are a British dependency, close to the coast of Normandy, France. The Isle of Wight also lies in the English Channel, separated from the British Mainland by a narrow extension of the channel called The Solent.