Liberals like to portray environmentalism as a liberal cause. What they won't tell you is many of the environmental disasters were caused by liberals: 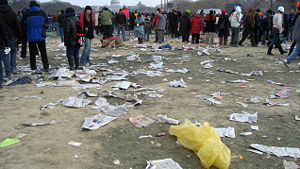 The aftermath of the inauguration of Barack Obama on January 20, 2009: 100 tons of trash to clean up.