According the website Absolute Write, "Absolute Write is a comprehensive informational Website and community for writers of all levels."[1]

A 2007 public commentary on Conservapedia's atheism article taken from a forum thread on the website Absolutewrite.com (the first four posts on the thread):

1. First person: "Offhand I didn't see anything incorrect with this, and am surprised at how accurate it is:

3. Third Person: "I'd have to agree -- nothing really pops out at me either, at least on the Atheism page.[2]

4. Fourth person: "Wow, that was amazingly accurate and very fair."[2]

The British atheist EJamesW on Conservapedia's atheism related articles: "...they're very detailed, thorough and have lots of quotes and citations."[3]

Below are two 2015 quotes of the British atheist EJamesW who is former editor at Conservapedia.

1. The British atheist EJamesW on Conservapedia's atheism related articles: "...they're very detailed, thorough and have lots of quotes and citations."[3]

2. An exchange betwwen the British atheist EJamesW and an evangelical Christian who helped create Conservapedia's articles on atheism: 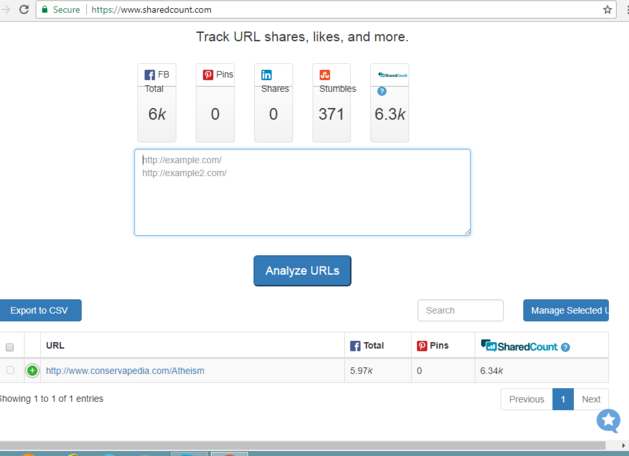 Social media shares for Conservapedia's atheism article. The above graphic is a screen capture taken on November 3, 2017 from the website Sharedcount.com

The Conservapedia atheism article has been shared at the Freedom From Atheism Foundation Facebook page.

Atheists are living in denial about Conservpedia's atheism articles

Conservapedia was founded by Andy Schlafly who is the son of the late anti-feminist Phyllis Schlafly. Yet, even the feminist Monica Shores quoted Conservapedia's material related to the new atheist Richard Dawkins. Her Ms. Magazine article titled Will “New Atheism” Make Room For Women? was one of the first articles criticizing the New Atheism movement for being sexist.[6] She also cited Conservapedia in her article and indicated: "The lack of lady presence is so visible that Conservapedia commented on it by noting that Dawkins’ website overwhelmingly attracts male visitors."[7]

Atheists have tried to pretend that Conservapedia's atheism article are merely reinforcing the opinions of Christian fundamentalists and nobody else take the material seriously. Yet, this is obviously not true.

There are atheists who are obsessed with Conservapedia and have Severe Conservapedia Obsessive Compulsive Disorder (SCOCD). Deep down they know that Conservapedia is playing a part in shaping public opinion about atheism.

Now that that atheist Aron Ra has surrendered....[2]