Difference between revisions of "Essay: The atheist and evolutionist helpline"

Don't let atheism and the pseudoscience of evolution turn you into a screechy monkey![1]

Don't let atheism and the pseudoscience of evolution turn you into a screechy monkey!

Attention atheist men! Why finding a wife may be so hard for you

Attention atheist men! Survey data and website tracking data of prominent atheist websites indicate that in the Western World, atheism appears to be significantly less appealing to women![3][4][5] Atheism may reduce your marriageability.[6][7][8][9] Don't tell women you are an atheist until at least the second date. Another option, given the shamefulness of atheism, is you could be a closet atheist like Charles Darwin and never admit to her that you are an atheist. After all, prominent atheists are not exactly known for their manliness.

However, when it comes to Christian ladies and marriage, a true Christian lady is going to ask if you are a Christian for the Bible teaches not to marry a non-Christian (The Bible also teaches a believer to stay married to a non-believer if you are already married).[10] In addition, interfaith marriages often have greater marital friction and interfaith marriages historically have had higher rates of divorce.[11] Therefore, it would not be surprising if atheist/theist marriages also have increased marital friction and higher rates of divorce since these two worldviews are so different.

Atheists, please don't lie. She may be very upset when the ugly truth comes out!

But please don't lie and pretend your a believer in God like Charles Darwin did in his work On The Origin of Species by Means of Natural Selection or The Preservation of Favored Races in the Struggle for Life because lying is a sin. Atheists, we know many of you have a secret you don't want to tell others. After all, prominent atheists have been haunted by the thought the natural world was the result of design. Even the great grand daddy of evolutionary "science" himself, Charles Darwin, late in life often had overwhelming thoughts the natural world was the result of design! After all is said and done, you know that God created and God designed the natural world and it must take a lot of work to suppress this matter.

The American Journal of Medicine medical journal declared that Darwin's wife, Emma, greatly disapproved of his evolutionist ideas and "This, facsimile of public reaction, must have kept lively his anxiety and torment".[12] For more information please see: Darwin's sickness.

Avoiding her daddy's shotgun and her mother's rolling pin

And forget about telling her parents you are an atheist! You don't want her father greeting you with a shotgun and a bunch of bananas and her mother greeting you with a rolling pin! And by all means keep the screeching to a bare minimum. Of course, given the abundance of the evidence for Christianity (see: Christian apologetics), the best way to avoid her daddy's shotgun and mother's rolling pin is to become a Christian!

How to avoid scowling at her mother's pictures of Jesus

Atheism and rates of marriage in the United States

Vox Day declared that according to the 2001 American Religious Identification Survey (ARIS) "more than half of all atheists and agnostics don’t get married."[14]

If you are still having a problem finding a wife, consider the possibility that the problem might be with you and not with womankind. Also, you may have problems controlling your screeching which often is very disconcerting to women. Keep reading below for additional help because there most certainly is help available.

Why some screechy monkeys screech so loud

The reason why some screechy monkeys screech so loud no doubt is they are plagued with doubts about atheism. Prominent atheists have experienced doubts about the validity of atheism. 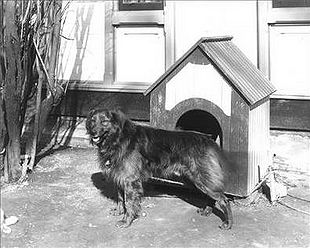 A pilot who made the mistake of flying a pro-atheism aerial banner standing next to his atheism doghouse.[15]

A pilot refuses to go into the atheism doghouse

In July of 2011, a pilot who was asked to fly a pro-atheism aerial banner refused and said "his wife would divorce him if he made the flight."[16]

Note: The idiom "in the doghouse" refers to "facing punishment for doing something wrong" and is often used by men to describe actions they took which made their spouses/girlfriends angry.[17]

2. Many American women love their kind and generous God fearing husbands who tend to give more to charity than the typical American atheist.[21]

Women and girls throughout the world love ponies, but most women dislike atheism.[22][23][24] Ponies are often nicer than American atheists who typically give less to charity than American theists.[25]

No. Most women don't like the old atheism either. Most girls don't like atheism period! [26][27][28] Discussion over.

Bob: My new girlfriend is giving me the silent treatment.

Sam: Why is she doing that?

Bob: I told her I was an atheist.

Hippocrates, who was also against abortion, was an early advocate of the health benefits of exercise and nutrition.[29]

On the other hand, PZ Myers and a significant amount of other New Atheism leaders, seem to lack a full appreciation of the worthiness of nutritional science, exercise science and the latest findings of medical science (see: New Atheism leadership's problem with excess weight).

The atheist population appears to have a number of people who have problems with obesity (see: Atheism and obesity).

According to the abstract for a paper presented at the 2004 annual meeting of the American Sociological Association: "Obese individuals have fewer dating opportunities, marry later and marry less desirable partners."[30]

Studies indicate that atheists are a minority in the population. Studies also indicate that people tend to marry people with similar values or who resemble their parents or themselves.[31][32] In addition, the Bible teaches Christians not to marry a non-Christian (The Bible also teaches a believer to stay married to a non-believer if you are already married).[33] Also, interfaith marriages often have greater marital friction and interfaith marriages historically have had higher rates of divorce.[34] Therefore, it would not be surprising if obese atheists find it more difficult to find marriage partners and if atheist/theist marriages also have increased marital friction and higher rates of divorce since these two worldviews are so different.

In June of 2010, the atheist PZ Myers commented that atheist meetings tend to be significantly more attended by males.[36] Please see: Atheists' meetings.

In February of 2010, the news organization The Telegraph reported that the atheist and evolutionist Richard Dawkins was embroiled "in a bitter online battle over plans to rid his popular internet forum for atheists of foul language, insults and 'frivolous gossip'."[37] In addition, Richard Dawkins has a reputation for being abrasive. For example, in September of 2010, Richard Dawkins became nasty towards a woman in an audience he spoke before (see: Women's views of Richard Dawkins).[38]

"actually, I﻿ do have trouble finding a smart, intelligent and atheist girlfriend cause they are so rare..." [39]

Atheism, as defined by the Stanford Encyclopedia of Philosophy, the Routledge Encyclopedia of Philosophy, and other philosophy reference works, is the denial of the existence of God.[40][41][42] Unlike Christianity, which is supported by a large body of sound evidence (see: Christian apologetics), atheism has no proof and evidence supporting its ideology (see: Attempts to dilute the definition of atheism).

Noted Bible commentator and clergyman Matthew Henry wrote concerning atheism: "A man that is endued with the powers of reason, by which he is capable of knowing, serving, glorifying, and enjoying his Maker, and yet lives without God in the world, is certainly the most despicable and the most miserable animal under the sun."[44]

Remember: Don't let atheism and the pseudoscience of evolution turn you into a screechy monkey!

Take the screechy monkey self-test before its too late!

Help me! I'm a screechy monkey!

You took the screechy monkey self-test and found to your horror that you are a screechy monkey. Are you condemned to eating monkey chow for the rest of your life or is there an alternative?

See also: Attempts to dilute the definition of atheism and militant atheism

The bitten dog yelps the loudest