Difference between revisions of "Essay: The future of religion/irreligion in New Zealand"

So what is happening in the world and in Europe? 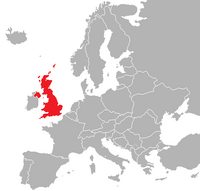