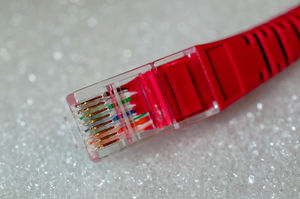 Ethernet is a type of computer network. Using this system, computers are connected using Ethernet cables, which are designed for high-speed data transfer. Ethernet cables consist of four twisted pairs, which connect at the end to an RJ-45 (registered Jack 45) plug. Wireless internet (WiFi) has been progressively pushing Ethernet in obsoletion, but it has not fully succeeded yet. Although WLAN (Wireless Local Area Network) connections are convenient, they still have difficulty competing with the speed of Ethernet. Additionally, cybersecurity experts generally agree that using hard-wired (cable) networks like Ethernet rather than wireless/WiFi, can increase computer security and home security when combined with other appropriate technology. However, as wired connections go, Ethernet is probably the least secure type of cable from physical tapping.

As networking and networkable devices improves, Ethernet has done so as well. While a 10Mbit/s connection is enough for some, others need a greater transfer speed. Through experimentation, a variety of "categories" or types of Ethernet cables have been created.

In some buildings, the HVAC system uses isolated ducts for incoming and return forced air. In this case, regular Ethernet cabling can be run in the non-circulating airspace. However, some HVAC systems only use ducts to provide air, and return air travels through the entire space above the drop ceiling. When cabling is run through this circulating plenum airspace, special cabling is used. If a fire broke out, regular cabling above the ceiling would begin to melt and burn, releasing large amounts of smoke as well as some toxic fumes. When the cables are in an isolated area, this is not a major concern, but when they are in the plenum air space, these fumes will be released into the room. For this reason, special cabling is used for plenum space.[3][4]
Plenum cables are jacketed in special flame-retardant, low smoke materials. The most common kind use Florinated ethylene polymer (FEP) with Polyvinyl Chloride (PVC).[4] Unfortunately, this cabling is usually less flexible so it can be more difficult to install.