Evelyn Farkas in Burisma hat and jacket with Burisma logo.[1]

Evelyn Farkas is a former Deputy Assistant Secretary of Defense for Russia/Ukraine/Eurasia. Farkas is a Non-Resident Senior Fellow at the Atlantic Council.[2] During the 2016 Presidential election Farkas served as a senior foreign policy advisor for Hillary Clinton. Farkas is a supporter of Ukrainian neo-Nazis and Banderists.[3]

That Farkas was an active, willing participant in the leftist conspiracy to undermine democracy is undeniable.[4][5] 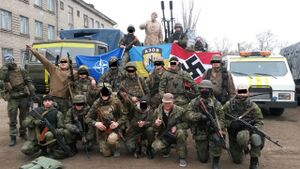 Farkas is an outspoken proponent and supporter of the NATO-backed neo-Nazi death squad, the Azov Battalion.[6][7]

As reported by Newsweek on January 5, 2022, Farkas said of the Zelensky regime's reliance on Ukrainian Nazis,

While working as a nonresident fellow at the Atlantic Council, Farkas traveled to Ukraine on a Burisma-funded trip, where she visited the company’s facilities while wearing a jacket and hat that featured the Burisma logo, the Washington Free Beacon reported in March 2020. She also participated in a 2018 conference bankrolled by the company.[9]

The Washington Post reported that by 2013, Obama's Presidential Daily Briefing (PDB) was making its way to more than 30 recipients, including deputy secretaries of national security departments. Farkas was one such recipient.

Traditionally only a few people could access the full PDB. Under Obama however the President's Daily Brief went to almost everyone at top levels in his administration.[10] The Washington Post said:

CIA director John Brennan worked Christopher Steele's "Company reports" into the PBD for dissemination throughout the government.[12] Although Farkas left the government in 2015, she retained her security clearance.[13] By her own admission she continued to receive classified information on Donald Trump throughout 2016 and into 2017. On March 2, 2017 Farkas, while interviewed on MSNBC's Morning Joe, a smoking gun went off:

“I was urging my former colleagues and, frankly speaking, the people on the Hill, it was more actually aimed at telling the Hill people, get as much information as you can, get as much intelligence as you can, before President Obama leaves the administration. Because I had a fear that somehow that information would disappear with the senior people who left. So, it would be hidden away in the bureaucracy, that the Trump folks, if they found out how we knew what we knew about their -- the staff, the Trump staff's dealing with Russians, that they would try to compromise those sources and methods... So I became very worried because not enough was coming out into the open, and I knew that there was more."[14]

It is shocking that people outside of government readily admit to felonious leaking of classified information. In January 2017 the New York Times reported,

"In its final days, the Obama administration has expanded the power of the National Security Agency to share globally intercepted personal communications with the government’s 16 other intelligence agencies before applying privacy protections."[15]

The expansion of the order made it difficult to narrow in on leaks.[16] Farkas' use of the term "people on the Hill" refers to people outside the Executive Branch - Congressional staff which numbers into the tens of thousands. Many staffers have press contacts and are sources of leaks. Once the materials fell into their hands, many partisan staffers then became armchair counter-intelligence sleuths, combing through the leaked material, feeding their mainstream sources with their latest pet theories on Donald Trump being in the pay of the KGB, and taking to Twitter threads with extended narratives full of speculation.