From Conservapedia
This is the current revision of Evolutionary belief and sexual immorality as edited by Wikignome72 (Talk | contribs) at 16:45, October 29, 2019. This URL is a permanent link to this version of this page.
Revision as of 16:45, October 29, 2019 by Wikignome72 (Talk | contribs)
(diff) ← Older revision | Latest revision (diff) | Newer revision → (diff)
Jump to: navigation, search 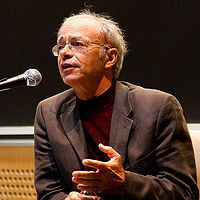 The evolutionist and atheist philosopher Peter Singer defends the practice of bestiality (as well as abortion, infanticide and euthanasia). Despite holding these immoral views the liberal and pro-evolution academic establishment rewarded his views with a bioethics chair at Princeton University.[1]

Also, according to atheist philosopher David Stove the theory of evolution was influential in regards to the sexual revolution.[3]

Public punishment of adulterers in Venice, Italy in the 17th century

According to a 2007 study reported in the Journal of Family Issues, adherents of liberal Christianity are more likely to engage in marital infidelity than theologically conservative Christians holding other important factors equal ("strong liberal Protestants" who typically profess to believe in evolution have more marital infidelity than "strong holiness/pentecostals" and "strong other conservative Protestants" holding other factors equal. Some Baptists are Darwinists or hold to old earth creationism in recent years although many have not and the study does not differentiate between these types of Baptists)[5]

Notable bestiality problems in areas where Darwinism and atheism are prevalent The first "bestiality rights" organization was founded in secular Europe

The first so called "bestiality/zoophile rights" group, called Equality for All, has its roots in secular Europe and formed in the '90s.[9]

The first so called "bestiality/zoophile rights" group, called Equality for All, has its roots in secular Europe and formed in the '90s.[10] It is located in the Czech Republic. According to a 2010 Eurobarometer poll, 16% of Czech citizens responded that "they believe there is a God" which the lowest rate among the countries of the European Union.[11]

Europe has higher rates of evolutionary belief than the United States.[12]

The evolutionist and atheist PZ Myers declared, "...I don’t object to bestiality in a very limited set of specific conditions..."[14][15] See: Atheism and bestiality

Since World War II a majority of the most prominent and vocal defenders of the evolutionary position which employs methodological naturalism have been atheists and agnostics (see also: Causes of evolutionary belief)[16]

The Barna Group found that atheists and agnostics in America were more likely, than theists in America, to look upon the following behaviors as morally acceptable: illegal drug use; excessive drinking; sexual relationships outside of marriage; abortion; cohabitating with someone of opposite sex outside of marriage; obscene language; gambling; pornography and obscene sexual behavior; and engaging in homosexuality/bisexuality.[17] Given the many diseases associated with homosexuality, the biblical prohibition against homosexuality is quite arguably one of the many examples where the Bible exhibited knowledge that was ahead of its time.