A gas station is a place where motorists can go to fill up their vehicles with gasoline. In the United States most vehicles run on unleaded gasoline. This usually includes grades of 87, 89, and 91 octane with the higher numbers being the more pure blends and the higher quality. Most modern cars run on 87.

Leaded gasoline was largely replaced decades ago for environmental concerns. 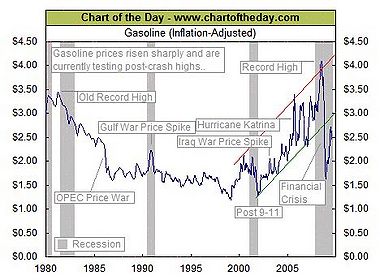 Some stations also sell diesel fuel, especially for large trucks. Diesel engines are more efficient, but are cumbersome (for example, they are hard to start).

In the 1950s, gas stations were full service. The trend that spread from the 1970s was towards self-service, which is the most common type today. There are still pockets on the east coast that are mostly full service.

The average profit on a gallon of gas in for a gas station owner is 23 cents.[1]