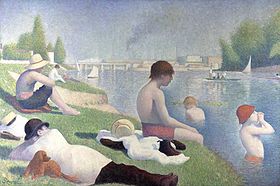 George-Pierre Seurat (1859 – 1891) was a French Neo-Impressionist painter, known for being good with colors. He applied the theories of Eugene Chevreul to create a technique known as pointillism, whereby small dots of color appear to combine to create the illusion of entirely different colors.

His masterpiece, Sunday Afternoon on the Island of La Grande Jatte, hangs in the Art Institute of Chicago. Its first public appearance was in Paris at the eighth Impressionist exhibition in May, 1886.