George Frisbie Hoar (August 29, 1826 – September 30, 1904) was a Free Soiler and Republican from Massachusetts who represented the state's 8th and 9th congressional districts in the United States House of Representatives, later serving as a U.S. senator until his death. Hoar was previously a member of the state legislature, similarly having served in both houses.

An abolitionist and Radical Republican,[2] Hoar recognized the immorality of slavery[3] and was raised by parents who actively opposed racial bigotry and often defied unjust laws.[1] Hoar expressed sharp disdain for the Democratic Party, which he viewed as the party of the saloon keeper, ballot stuffer, and Ku Klux Klan.

Interestingly enough, Hoar was an early member of the GOP Half-Breeds faction,[3][4] which as a whole[note 1] was associated with moderate/liberal Republicanism in opposition towards the conservative, pro-spoils system Stalwarts who were largely comprised of the Radical Republican faction remnants.

Hoar was referred to by his middle name "Frisbie" among friends.[3]

An economic nationalist, Hoar believed in capitalism as progress for civilization in accordance to the plans by God.[3] He supported measures which aimed at protecting American industries from foreign competition.

According to an analysis of his voting record, Hoar supported the conservative side in Congress 89% of the time.[2]

In 1868, Hoar was easily elected to the U.S. House from Massachusetts' 8th congressional district, defeating Democrat Henry H. Stevens by a landslide.[5] He was re-elected for three additional terms,[6] generally facing little serious competition except for the 1874 midterms, where he only narrowly defeated Democrat Eli Thayer by only 2.5 percentage points.[7]

In Congress, Hoar established a reputation as a conservative on economic issues.[2] He opposed inflation, post-war greenbacks without the backing of gold, and free coinage of silver. In addition to viewing silver as an "inferior metal," Hoar supported protectionist tariffs, a common position within the Republican Party.[2]

In 1874, a dying Charles Sumner lied on his deathbed, and among his last visitors were Rep. Hoar.[2] Sumner told the representative to ensure passage of what became known as the Civil Rights Act of 1875:

Indeed, Hoar successfully fought in ensuring the bill's passage,[8] although it became law in a weakened form.[2]

Hoar declined to seek a fifth consecutive House term in 1876, instead running for Senate.

In the 1876 elections, Hoar ran for U.S. Senate from the state's Class II seat, and easily won; he was re-elected four times.[6]

Hoar was a leading opponent of the Chinese Exclusion Act on principled grounds against racial and ethnic bigotry,[1] believing in America being a land that should not make legal distinctions on race or color.[2] He was one of fifteen Republican senators to vote against the bill in 1882.[9] 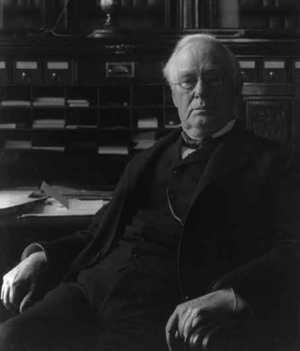 In 1891, Hoar was a leading senator who sponsored the Federal Elections Bill (also known as the Force Bill) introduced by colleague Henry Cabot Lodge, Sr. that aimed to utilize the 15th Amendment for securing black voting rights in the South.[2][8] When the legislation faced filibusters by Democrats, Republican Vice President Levi P. Morton refused to help the Senate GOP make further efforts in support of the bill; an angered Hoar denounced Morton as having:[11]

Western liberal, pro-inflation Silver Republicans opposed the Lodge Bill, believing their anti-civil rights stance would attract Southern Democrat support for their pro-silver cause.[11] When the Democrat/Silver Republican coalition narrowly passed a resolution by a 35–34 vote over main GOP opposition substituting the Force Bill from Senate business, the legislation was effectively defeated.

While opposing racist immigration policies, Hoar also favored literacy tests as prerequisites for immigrating to the United States, voting for the Lodge immigration bill.[2] Although vetoed by President Grover Cleveland, its provisions later re-appeared in the Immigration Act of 1917.