From Conservapedia
This is the current revision of Georges-Henri Lemaître as edited by Gentenaar (Talk | contribs) at 08:14, February 14, 2017. This URL is a permanent link to this version of this page.
Revision as of 08:14, February 14, 2017 by Gentenaar (Talk | contribs)
(diff) ← Older revision | Latest revision (diff) | Newer revision → (diff)
Jump to: navigation, search 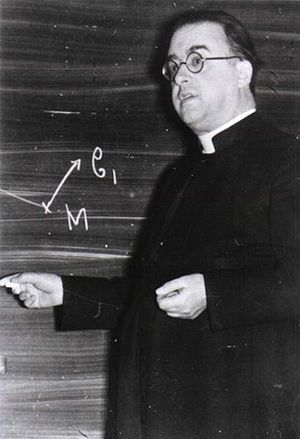 Georges-Henri Lemaître (1894–1966) first proposed (in 1927) the creation of the universe through a "Big Bang." A Belgian, Roman Catholic priest, and veteran of World War I, he was considered by the secular physics community an accomplished physicist and astronomer. Edwin Hubble found evidence to support Lemaître's theory two years later.

Lemaître's view was revolutionary for his time and decades ahead of the rest of the physics world. Indeed, confirmation of some of Lemaître's ideas was still being realized, over the objection of leading physicists, towards the end of the 20th century.[1]

Most physicists, including Einstein, disagreed with Lemaître at first,[2] as they thought the universe existed forever in a steady state. But they subsequently changed their opinion, agreeing with Lemaître as evidence mounted to support his theory.