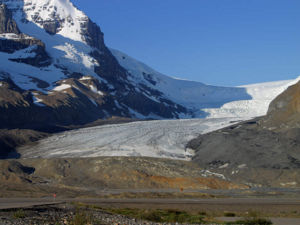 A glacier is a large mass of slowly moving ice formed from snow falling over the years. Though solid, glaciers are able to flow due to the intense pressure of their own weight. They flow in a similar fashion to rivers, although much slower. Glaciers often advance, or grow larger, during the winter months, and recede, or grow smaller, during the summer months. Glaciers are the most powerful force of erosion, able to sculpt entire landscapes and shape mountains. Valleys formed by glaciers have a distinctive U shape in cross-section. Glaciers exist in Antarctica, and mountainous areas of North America, South America, Europe, Asia and New Zealand.[1]

A 2008 study claimed specific glaciers around the world had shrunk an average of 4.9 feet in 2006. The study said that between 1980 and 1999, glaciers lost an average of a foot in length every year, but after 2000 the average loss increased to 20 inches. Global warming was given as the reason.[2] Previous claims of glacier shrinkage where global warming was blamed proved to be incorrect, as it was found that the glaciers were actually growing.[3] Indeed, glacier growth through February 2008 showed a marked turn around from earlier retreating.[4]

Errors committed by the IPCCEdit

A report on global warming by the IPCC asserted that the Himalyan glaciers will be completely melted by 2039, and this claim was a key part of their publicity campaign for reducing greenhouse gas emissions (see also cap and trade). However, it turned out that the assertion of glacier melting had no scientific foundation.[5]