Global warming is an increase in average air temperature in the Earth's atmosphere. As far back as temperature records can be reconstructed, periods of global warming and global cooling have alternated; see ice ages and interglacial warming.

In the modern period of global warming, a slight increase of 0.8 °C [1.4 °F] has been measured at weather stations throughout the world, since around 1850, when organized records began to be kept. Since this happens to correlate with increases in carbon dioxide, many have speculated about their possible relationship. Despite this, there is no completely proven model explaining the rise in global temperatures.


Since 1989, advocates have clashed on the issue of whether human beings are more responsible than nature for modern periods of global warming; see "greenhouse warming" and global warming theory.[1]

Most non-scientific support for the global warming theory rests on popular accounts such as Al Gore's An Inconvenient Truth or on reports issued by the UN's IPCC. However, Keston Green of Monash University and Scott Armstrong of the Wharton School wrote that:

Former vice-president Al Gore calls it a moral issue, while climate scientist Richard Lindzen says, "It is probably the most immoral thing you could do to restrain energy so that the billions in the earth who don’t have access to electricity won't conveniently get it." [3] However, it is to be noted that many proponents of the theory propose energy conservation only until 'green' energy generation becomes predominant.[Citation Needed]

In the general, the term global warming can be used for any upward trend in the global mean temperature, but it is mostly used to refer to the 1° F warming since 1850.

The two sides are divided on whether this warming is a natural recovery from the Little Ice Age or a man-made environmental phenomenon. There are also debates regarding the potential positive or negative effects of a warming.

Republicans and Democrats in the U.S. are evenly split on the issue. Boston Globe writer Ellen Goodman wrote:

Controversy and scientific inaccuracies may have contributed to addressing 'Climate Change' in place of using Global Warming. As the northern pole region melts, the southern pole region ice is growing [5]

Average Earth surface air temperature has risen about 1° F since 1970. [6] How much of this is due to contamination of the temperature record from the urban heat island effect is hard to assess. Efforts are currently underway to detect and remove this bias. Spurious warming trends that might be considered as global warming can occur almost anywhere. [7] Nonetheless, controversy has persisted over the influence of urban warming on reported large-scale surface-air temperature trends. [7]

According to temperature reconstruction made within an Old Earth paradigm, there have been many cycles of naturally-caused global warming and cooling over many millions of years (see climate cycles). Some scientists, including Richard Lindzen of MIT, Sallie Baliunas of Harvard and Fred Singer (independent), say that the recent warming could be part of another natural cycle or random fluctuations in the atmosphere. However, many scientists also think that human activities were most likely the cause of the the planet's recent warming.

Indeed, a recent Gallup poll of climate scientists in the American Meteorological Society and in the American Geophysical Union shows that a vast majority doubts that there has been any identifiable man-caused warming to date (49 percent asserted no, 33 percent did not know, 18 percent thought some has occurred; however, among those actively involved in research and publishing frequently in peer-reviewed research journals, none believes that any man-caused global warming has been identified so far). [8]

Oddly enough, even though 82% of US climate scientists refused to support the global warming theory then, liberal activists were already claiming a scientific consensus for anthropogenic global warming. (It's hard to understand how 18 percent credence in any global warming translates into "consensus" support for human-caused global warming.)

The campaign to convince the public (and their elected representatives) that the "science is settled" began in 1988 or 1989.

By the 2008 elections both candidates for the Presidency of the United States were proposing plans to mitigate climate change.

Natural Variability of the Climate System

Evolutionary scientists who believe in global warming think that the Earth has experienced numerous ice ages over two million years, during which global temperatures dropped approximately 6 °C [11 °F] and then returned to normal. The frigid temperatures allowed ice sheets to expand southward, covering much of Asia, Europe, and North America. The cooling associated with ice ages is gradual, while the terminations are relatively rapid. However, even the rapid terminations of ice ages take centuries to millennia.

Natural Climate Change on Other Planets

Since the Viking spacecraft reached Mars in the 1970s until recent readings were taken, the average temperature on Mars has risen 0.6 °C [1.1 °F] just as the average temperature on the earth has risen. Since human industrialization is clearly not to blame for the change on Mars, other causes are being considered. One possibility is that dust storms are changing the albedo of the planet, allowing it to warm, while another possibility is that solar variations from the sun are causing the warming.[9][10]

Recently, it has also been found that similar to the Earth and Mars, Neptune is also undergoing global warming. Measurements taken at the Lowell observatory in Arizona have shown an increase in Neptune's brightness and temperature since 1980 following the same pattern seen on Earth and Mars. The researchers who discovered this warming suggest there may be a correlation between the warming and solar variations.[11]

Pluto has also been found to be undergoing global warming. The overall temperature increase on Pluto has been greater than that on the earth.[12]

Global temperatures change on other plants even when there is no life, something which strongly supports the idea that humans are not necessarily the cause of earth's global warming. Moreover, the temperature on Uranus has fluctuated back and forth. There is no reason that fluctuations cannot occur on earth, too.

The need to fight "global warming" has become part of the dogma of the liberal conscience. [8]

Clearly, "global warming" is a tempting issue for many very important groups to exploit. ... dealing with the threat of warming fits in with a great variety of preexisting agendas [like] dissatisfaction with industrial society (neopastoralism), ... governmental desires for enhanced revenues (carbon taxes), and bureaucratic desires for enhanced power. [8]

The global average surface temperature warmed about 0.9 °F over the second half of the 20th Century.

Assessments of climate science by the United Nations (see IPCC - Intergovernmental Panel on Climate Change) have claimed that scientists are 90% sure that over 50% of the observed global warming in recent decades is human-caused, and that continued global warming should be expected over at least the next century. Science published a literature search by Naomi Oreskes concluding that "scientific consensus" supports the IPCC reports. [15]

Several prominent scientists have pointed out the politicized science of the UN's assessment methods. The scientific reports are submitted to a panel of representatives appointed by each country in the IPCC. Several scientists whose research demonstrates that climate change is taking place have complained about their work being misrepresented by the U.N.

Perhaps more important are the pressures being brought to bear on scientists to get the "right" results. Such pressures are inevitable, given how far out on a limb much of the scientific community has gone. The situation is compounded by the fact that some of the strongest proponents of "global warming" in Congress are also among the major supporters of science (Sen. Gore is notable among those). [8]

States that Intergovernmental Panel on Climate Change studies are flawed. The present analysis suggests the models failure to predict other climatic phenomena arises from defects in its evaluation of radioactive forcing, no-feedbacks climate sensitivity parameter and feedback multiplier. In conclusion, that there may be no "Climate Crisis" and for governments to reduce emissions may be pointless or even harmful. [16] This was published on a forum of the American Physical Society with the following disclaimer "The article has not undergone any scientific peer review" and "the APS disagrees with the articles conclusions" In fact, the APS disagrees with the article without ever reviewing it.

After the successful completion of a lawsuit against his movie 'The Great Global Warming Swindle', filmmaker Martin Durkin statements read [17]

Geology professor and scientist at the University of Oklahoma, David Deming talks about a biased AP article mentioning global warming "...whether it's continuing that was completely beyond the evidence." [18]

Also in discussion of the biased AP report, Michael R. Fox, a retired nuclear scientist and chemistry professor from the University of Idaho says, "There is little evidence to believe that man-made carbon dioxide is causing temperature fluctuation. Other factors, including sun spots, solar winds, variations in the solar magnetic field and solar irradiation, could all be affecting temperature changes."

Richard S. Courtney, a U.N. Intergovernmental Panel on Climate Change (IPCC) expert reviewer and a U.K.-based climate and atmospheric science consultant says "Rubbish! Global warming is not 'accelerating," and "...that anybody who proclaims that 'Global warming is accelerating' is a liar, a fool, or both." [19]

Don J. Easterbrook, Ph.D., emeritus professor of geology at Western Washington University, asked, "What does it take to ignore 10 years of global cooling....? The answer is really quite simple — just follow the money!"

Bob Barr is the only major 2008 Presidential Candidate who has not adopted wholesale the theory of human-caused global warming.

According to his website,[21] Republican Presidential candidate John McCain will take a more "aggressive approach" to global warming which he has declared as "undeniable and urgent." He was supported in this in June 2008 by Republican governor Arnold Schwarzenegger who said McCain was the "real deal on the environment".[22].

In his own words, McCain says "the overwhelming majority of scientific opinion in America today, and in the world, is that climate change is real. The fact is that it is real. The fact is that the solution to it is the development of technologies.... and a cap and trade proposal.... the debate is over."[5] Unless McCain believes that Global Warming is entirely or largely man-made, there would be no sense in supporting a cap and trade solution.

Barack Obama believes "that global warming is not just the greatest environmental challenge facing our planet—it is one of our greatest challenges of any kind." During his first 100 days in office, he would enact a giant and far-reaching tax "an economy-wide cap on U.S. carbon emissions that will reduce U.S. emissions by the amount scientists agree is necessary (80%) or $45 Trillion dollars". [23] He comments "Putting a price on carbon is the most important step we can to take to reduce emissions."[24]

Those inaccuracies include the following 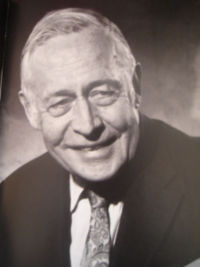 Critique of the Hockey Stick Reconstruction