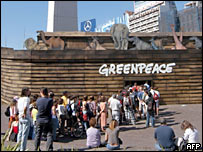 According to Public Interest Watch (PIW), Greenpeace Fund, Inc. a reputedly educational, public-interest-oriented 501(c)(3) directed $24 million in tax-exempt contributions into Greenpeace, Inc., non-exempt programs during tax years 1998, 1999 and 2000. According to the most recent tax returns available for both groups, in 1999, Greenpeace, Inc.'s total revenues equaled $14.2 million. Of this amount, $4.25 million, or 30 %, came from Greenpeace Fund. Greenpeace Inc. is a more directly political and activist unit, and as such is designated by the Internal Revenue Code as a 501 (c)(4). Mike Hardiman of PIW said "Greenpeace has devised a system for diverting tax-exempt funds and using them for non-exempt — and oftentimes illegal — purposes...It's a form of money laundering, plain and simple."

On January 30, 2003, some 30 Greenpeace demonstrators breached the central control building of the Sizewell B nuclear-power plant in Suffolk, England. Earlier in October 2002, approximately 150 Greenpeace protesters were arrested after penetrating the same facility. [1]

Greenpeace wants to shut down all the nuclear reactors and phase out nuclear power. [2] [3]

This fire and radioactive leakage reminds us yet again of the serious threats posed by nuclear power.... Nuclear power undermines the real solutions to climate change, by diverting resources away from the massive development of clean renewable energy sources the world urgently needs. [4] Greenpeace wants the Kyoto Protocol to be enacted and even further restrictions due to Global Warming. [5] [6] [7]

Greenpeace is calling for global emissions to peak by 2020 and fall rapidly thereafter ensuring at least a 50 percent reduction from 1990 levels by the year 2050 globally, and eliminate fossil fuel emissions before the end of the 21st century. This platform is outlined in its ‘Global Energy Scenario’ which is available at: http://www.greenpeace.org/usa/press/reports/energy-r-evolution-a-bluepr[8]

On 10th July, 1985 the Rainbow Warrior, flagship of Greenpeace, was destroyed in an Auckland harbour by high explosive devices that resulted in the death of Fernado Pereira, a crew member and photographer. An investigation into the bombing resulted in the arrest, trial and conviction of Major Alain Mafart and Captain Dominique Prieur of the French Armed Forces. After initial denials by the French President François Mitterrand, the French Prime Minister Laurent Fabius admitted that the French Secret Service ordered the attack in order to deny Greenpeace access to French territorial waters.[9] Mafart and Prieur pleaded guilty to arson and manslaughter and were sentenced to ten years on the manslaughter charge and seven years on the arson charge.[9] However, in an agreement between the French and New Zealand governments brokered by United Nations Secretary General, Mr Xavier Perez de Cuellar, the French government, while not apologizing, paid compensation to Greenpeace and the New Zealand government for this act of state-sponsored terrorism. [10] In return Mafart and Prieur were transferred in July 1986 to Hao atoll in French Polynesia to serve three years. However, in December 1987 Mafart was returned to France for treatment of a stomach condition, and in March 1988 was given a new appointment. Prieur and her husband, who was in charge of security at Hao atoll, were returned to France in May 1988.[10]