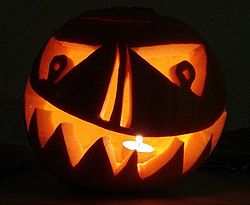 Colors orange and black are traditionally associated with Halloween as well as costumes of witches, ghosts, famous monsters, skeletons, and devils; also seasonal foods like Caramel apples, pumpkins, pumpkin pie, caramel corn, and candies. Black when used as a color commonly represents death, and orange is used to represent the harvest.