From Conservapedia
This is an old revision of this page, as edited by RandolfH (Talk | contribs) at 23:15, 10 November 2009. It may differ significantly from current revision.
Revision as of 23:15, 10 November 2009 by RandolfH (Talk | contribs)
(diff) ← Older revision | Latest revision (diff) | Newer revision → (diff)
Jump to: navigation, search
A hamburger (or burger) is a sandwich invented in and identified with America and the basis of a large fast food industry. There are many variations, but the typical burger comprises a bun containing a patty of ground, cooked beef. The burger is often typically served with some combination of relish, mustard, ketchup, cheese, lettuce, pickle and potato chips. The bun is usually toasted or warmed. It can be eaten with one hand while driving a car. The word "hamburger" refers to the German city of Hamburg, which once enjoyed prosperous commerce with the Baltic Provinces in Russia, where shredded raw meat (now called "steak tartare") was popular. [1] Around 1900, a popular meal in the United States was "Salisbury steak," cooked, ground steak, which was promoted by a food faddist named Dr. J. H. Salisbury as a cure for innumerable ailments. At some point in the late 19th or early 20th century the modern hamburger, that is cooked patties within a roll, made their first appearance in the United States, although exactly where and when is still debated.

Many cultures over the centuries have cooked finely chopped or ground meats in shapes such as meatballs, patties, or steaks, often flavored with other ingredients. The Larousse Gastronomique, for instance, gives a half-dozen Hungarian, German, and Austrian recipes for what it calls Keftedes, all translated as variations on "hamburgers". [2]

Tens of thousands of diners and restaurants in the U.S. serve their own version of the hamburger. Standardization was invented by Walter Anderson, who in 1916 in Wichita, Kansas, opened the first of a nationwide chain of White Castle fast food outlets. Anderson trained his staff to cook and serve in exactly the same way, cooking dozens of pre-weighed, pre-shaped burgers at once on a dedicated griddle, and serving them on specially designed buns; the customers paid 5 cents. Ray Kroc (1902-1984) in 1954 bought a California "drive-in burger bar" from Richard and Maurice McDonald. Kroc standardized his product, so that today the McDonalds hamburger has meat that weighs 1.6 ounces (45 grams) and measures 3 and 5/8 inches (9.2cm) across; and is garnished with a quarter of an ounce of chopped onion, a teaspoon of mustard, a tablespoon of ketchup and a pickle slice one inch in diameter. The Big Mac is likewise standardized with two patties and a sauce. Customers have limited choices, but are typically served in less than 90 seconds. The local franchiser, who spent millions to buy the outlet, has little control over the menu, and must purchase supplies from the corporation, and pay it a royalty fee as a percent of sales. 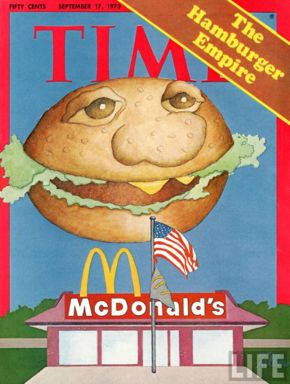 In the 1960s the McDonald’s Corporation turned the burger into the Model T of fast food. The hamburger played an important role in America’s transformation into a mobile, suburban culture, and in the 21st century, despite strong competition from pizza and tacos, it remains America’s favorite sandwich. By 1985 McDonald's was selling 5 billion burgers a year (and stopped updating the count on its distinctive yellow arches.) Over 31,000 McDonald outlets operate in 118 countries, with slightly different menus according to local tastes.[3]

Along with Coca-Cola, the hamburger was once disdainfully regarded by many Europeans as the epitome of low cultural taste. With the advent of mass marketing from imitators of McDonald's such as Burger King, however, hamburgers have now spread around the world and, with variations, are consumed in every culture. Indeed the Economist magazine uses the price of a Big Mac to compare the price levels of different economies because it is the single most nearly standardized product in most countries around the globe.