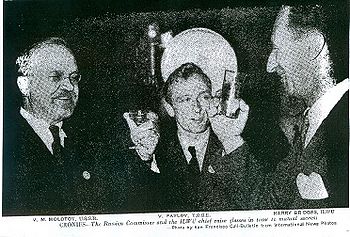 Alfred Renton Bridges was an Australian citizen, a San Francisco labor leader, a secret member of the Central Committee of the Communist Party,[1] and a clandestine Soviet operative.

Bridges was born in 1901 in Melbourne, Australia and settled in San Francisco in 1920 where he became an organizer of the longshoremen. In 1921 he joined the anarchist Industrial Workers of the World (IWW). Between 1938 and 1956 the United States Government tried to deport Bridges. In four different federal hearings Bridges denied his CPUSA membership under oath.

As a labor organizer, he played an important role in the 1934 San Francisco waterfront strike. Two years later Bridges became the founding president of the International Longshoremen's and Warehousemen's Union (ILWU). "My thinking is Marxist," Bridges later proclaimed. "And the basic thing about this lousy capitalist system is that the workers create the wealth, but those who own it – the rich – keep getting richer, and the poor get poorer." When unemployed Depression workers tried to take the waterfront jobs that union members had walked away from, Bridges’ workers unleashed verbal and physical violence against the new workers.

"Harry’s boys got out their baseball bats to persuade the Scabs that it wasn’t worth the trouble," boasted one dockworker union propagandist. Some replacement workers died in unusual "accidents," including two college students. Many others were severely beaten, injured, and crippled. A deputy sheriff in Seattle who tried to arrest violent union thugs was murdered, shot through the head. "Up and down the coast," wrote Bridges biographer Charles Larrowe, "the waterfront was turned into a battlefield."[2]

John Leech, a former official in the California Communist Party, testified that within the party, Bridges went under the pseudonym "Rossi."[3] According to Herbert Romerstein, former director of the United States Information Agency's Office to Counter Soviet Disinformation and Active Measures, Comintern archives in Moscow confirm his testimony, identifying "Rossi" as "President of the Dockers' and Warehouse Workers' Union."[4] Leech also testified that in 1936 the California Communists put forward Bridges as a candidate for the CPUSA Central Committee, and the national CPUSA convention ratified Bridges' election. Ex-Communists Paul Crouch and Manning Johnson corroborated Leech's testimony, testifying that they had been at the 1936 convention and had witnessed the vote putting Bridges on the Central Committee.[5] Their testimony was confirmed by a 1938 exchange in which the Communist Party sent a list of names to Moscow for approval to serve on the American party's Central Committee. Among those given Moscow's seal of approval was Bridges.[6] According to historian Harvey Klehr, documents from the Soviet Comintern archives reveal that:

In its annual report of January 3, 1939. the Dies Committee urged that deportation proceedings be "vigorously and promptly" prosecuted against Harry Bridges. It declared that Bridges was a Communist alien, that he belonged to an organization which preaches the overthrow of the United States Government by force and violence; that he himself advocated the overthrow of the Government by force and violence; and that he had likewise advocated sabotage. Bridges requested that the government name the organization and the government stated it was the Communist Party of the U.S. In December 1939 the Trial Examiner found that Bridges was neither a member of nor affiliated with the Communist Party and therefore could not be deported.

In 1940, in response to the failure to deport Bridges, the United States House of Representatives amended the law relating to the deportation of aliens to allow for deportation of those who were at the time they entered the U.S. or any time thereafter a member of or affiliated with an organization that advices, advocates, and teaches the overthrow by force and violence the U.S. government. Attorney General Francis Biddle then ordered the FBI to investigate Bridges to see if there was cause under the amended law to reopen deportation proceedings. Bridges was again arrested in 1941.

The Presiding Inspector in the second deportation proceedings ordered deportation on the basis of finding that after entering the U.S. Bridges was a member of and affiliated with the Communist Party. The Immigration Appeals Board reversed. The Attorney General reviewed the case and ordered deportation. Bridges petitioned for a writ of habeas corpus but was denied by the District Court for the Northern District of CA. The Ninth Circuit Court of Appeals affirmed. Bridges v. Wixon, 144 F.2d 927 (9th Cir. 1944). The Supreme Court reversed, 326 U.S. 135 (1945), on a 5-3 ruling that "affiliation" was improperly construed by the appellate court and that under a proper construction, Bridges had not been affiliated with the Communist Party at any time after entering the U.S.

Harry Bridges was successful in obtaining American citizenship in 1945. But on May 25, 1949, he was indicted by a Federal grand jury on charges of conspiracy and perjury in connection with his obtaining citizenship.

The trials received national attention, thanks in large part to the Song for Bridges written and sung by Woody Guthrie, Lee Hays, Pete Seeger, and Millard Lampell.

Emory University historian and political scientist Harvey Klehr in a book he co-edited, The Secret World of American Communism (Yale University Press, 1995), reveals that documentation from the archives of the fallen Soviet Union identifies Bridges not only as a member of the Communist Party USA but also as a clandestine member of the CPUSA's Central Committee.

"Bridges," said Marxist-turned-conservative David Horowitz, "was a member of the Central Committee of the American Communist Party, a perjurer, a lifelong servant of the greatest mass murderer in human history and a sworn enemy of the United States.”

While claiming not to be a Communist Party member loyal to Moscow, Harry Bridges led his Longshoremen union to do everything that Communist Party apparatchiks would do. In 1936, he ordered his workers not to load shipments of scrap metal sold to Japan. Japan at the time was at peace with the United States, but its fascist troops in Manchuria were a barrier to the Soviet empire's expansion in the Far East.

During the Spanish Civil War, Bridges and the ILWU had opposed the Neutrality Act, supporting aid to the Soviet-backed forces in that conflict. But during the Nazi-Soviet pact, the ILWU under Bridges did an about-face, suddenly discovering that "war in Europe was of no concern to it," according to a report by the CIO. "It attacked President Roosevelt and his policy of giving aid to allies" Britain and France, then fighting for their lives under the Nazi onslaught. According to Bridges, "the present Administration's policies" of Lend-Lease to the allies "have no concern except the protection of the investments of the large bankers and industrial interests of the country."[8] But the moment Hitler attacked the Soviet Union, Bridges demanded all-out American support for the Soviet Union,[9] mobilizing his workers to set productivity records speeding the flow of goods to those opposing Nazi Germany. Bridges also attacked other unions’ workers who threatened strikes or work slowdowns to get higher wages when this might reduce the flow of goods to those on the Soviet side of the conflict.

Bridges became a U.S. citizen in 1945. Under Bridges' leadership the ILWU continued to grow in size and influence, and took an active stand against the Korean war and Vietnam war.

The Port of Los Angeles still honors Bridges with a "Harry Bridges Boulevard."[10] In 1992 the University of Washington established the Harry Bridges Endowed Chair in Labor Studies.[11] In 2001, nine years after Bridges' membership in the CP Central Committee had been publicly exposed, the university renamed its Center for Labor Studies "the Harry Bridges Center for Labor Studies."[12] That year, Speaker of the House Nancy Pelosi (D-CA) inserted into the Congressional Record an encomium memorializing the centennial anniversary of his birth, honoring Bridges as "arguably the most significant labor leader of the twentieth century... beloved by the workers of this Nation, and recognized as one of the most important labor leaders in the world."[13] In 2009, a Harry Bridges memorial was erected in San Pedro, California.[14] The following year, the city of Long Beach, California, renamed Queen Mary Events Park "Harry Bridges Memorial Park."[15]