Harry Mason Reid (b. December 2, 1939 - d. December 28, 2021, age 82), was the far-left senior Senator from Nevada and U.S. Senate Majority Leader in the 111th Congress for the Democrats. He became Minority Whip (the #2 job) in 1998, and Minority Leader in 2005 and Majority Leader in 2007. He won reelection from Nevada in 2010 despite low approval ratings and a strong challenge amid suspicions of voting irregularities.[1] He is the first member of the Church of Latter-Day Saints to become Senate Majority Leader. As Democrat leader he is remembered fondly by collogues for his often insensitive and provocative racially charged comments and his far left liberal views.[2] He is considered an idiot[3] and a "mumbling gangster,"[4] so he was a natural choice to lead the Democrats in the Senate.

Since leaving the Senate, Reid has come to the reality that mainstream Democrats were becoming too radical even for him,[5] as well as the fact that Donald Trump is, in his words, a "very, very smart man."[6]

While Reid had little impact on American politics other than to make nasty, senseless remarks against Justice Clarence Thomas and others, Reid apparently pushed the Church of Latter-Day Saints leftward politically and thereby decreased its rate of growth in the United States.

Reid's career in politics began in 1967 when he was elected to the Nevada State Assembly and in 1970 was elected Lieutenant Governor. He unsuccessfully ran for the United States Senate in 1974. From 1977 to 1981, Harry Reid was the Nevada state gaming commissioner. This led his character to be parodied in the 1995 film "Casino" played by Dick Smothers. During Reid's tenure as gaming commissioner, he allowed the FBI to videotape businessman Jack Gordon, offering him a $12,000 bribe. Then, according to a Las Vegas Review-Journal account, Reid "put his hands around Gordon's neck and said, 'You son of a b-tch, you tried to bribe me!'" [9] In 1979 Gordon was arrested and sentenced to six months in jail.

Reid faced a tough re-election in 2010, with The "Cook Political Report" in September 2009 having rated the contest as a "Toss Up". His status weakened in summer 2009, as discontent with President Obama and the Democrats' health plan mounted, and as the Recession of 2008 continued to batter Las Vegas and the entire Nevada economy, in addition to no relief in sight from the stimulus bill Reid pushed through the Senate. Reid's inability to improve his standing in the polls, coupled with the deteriorating political environment for Democrats nationally, made clear indications that his political problems were deep and will be difficult (though not impossible) to fix, said Cook.

After receiving the endorsement of the Tea Party Express and Club for Growth, former Assemblywoman Sharron Angle defeated former State Senator Sue Lowden by 14 points and businessman Danny Tarkanian in the Republican primary by 17 points. 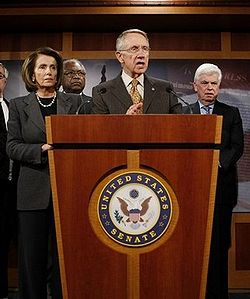 Senate Majority Leader Harry Reid with House Speaker Nancy Pelosi (left) and Senator Chris Dodd (right)
Harry Reid has voted with a majority of his Democratic colleagues 94.8% of the time during the current Congress.[11] He has been a key spokesman for liberal positions on taxes, health care, government bailouts, unions and immigration. In 2009 Reid called opponents of universal health care "evil-mongers." He later explained "I maybe could have been less descriptive, I doubt you’ll hear it from me again." [12] Reid voted to authorize military force in Iraq in 1991 and again in 2002. However, he later became a proponent of troop withdrawal.

His major accomplishment has been to block the use of Yucca Mountain in Nevada for the safe storage of nuclear wastes from around the country.

At one point Reid described himself as pro-life, saying "Abortions should be legal only when the pregnancy resulted from incest, rape, or when the life of the woman is endangered." [13] Reid voted to express opposition to Roe v. Wade [14] and supported the ban on Partial birth abortion.[15] However, since being elected to his leadership position he has proven himself to be a staunch pro-Abortion advocate and has even voted to use taxpayer dollars to fund overseas abortions.[16] From 2007–2008, the National Right to Life Committee gave Harry Reid a 28% rating.[17]

Reid cosponsored a constitutional amendment to ban flag burning. He opposes environmentalists on mining issues. He is a strong supporter of the gaming industry, which forms the basis of the state's economy.

Reid supports gun control, and in 2007 Gun Owners of America gave Reid a grade of F.[18]

As a United States Senator Harry Reid has been the subject of Controversy and Criticism. In 2006 he was ranked the 10th most corrupt person in Washington by Judicial Watch.[19] Reid was investigated by the FBI in 2008 for illegal campaign donations.[20]

Reid ludicrously claimed in 2012 that Republican presidential candidate Mitt Romney hadn't paid taxes in 10 years - without, of course, offering any substantiation. [1] The IRS may have illegally leaked Romney's tax information to Reid.[21]

Reid has received over $60,000 from groups that are related to convicted lobbyist Jack Abramoff, including about $50,000 from Native American gaming interests. Several times, Native American tribes that were clients of Jack Abramoff donated money to Reid after Reid's votes produced favorable results for the tribes. However, Reid described the Abramoff affair as "a Republican scandal."

Reid has accepted free tickets valued at hundreds of dollars for boxing matches between 2003 and 2005 from the Nevada Athletic Commission. Senate ethics rules permit gifts from such governmental agencies.

Senator Reid came under fire in 2006 for failing to properly report to Congress a $700,000 land deal. Harry Reid's member interest in limited liability company (LLC) was allocated $1.1 million of the gross proceeds attributable to the sale of a parcel of land. In 1998, Reid bought a plot of land for $400,000, fair market value at the time. One of the sellers was a developer who arranged a land swap that Reid supported.

On April 19, 2007, representatives of 50 Iraqi Sunni tribes announced the formation of a new democratic political party called Iraq Awakening, with the aim of fielding candidates in elections at all levels of government, including the parliamentary elections in 2009. In the predominantly Shiite country, a large scale political organization among the Sunni is precisely what al-Qaeda insurgents have opposed. Later the same day, Sen. Reid demanded the pullout of American forces, on the basis that Iraq had been "lost".[22] In May, Majority Leader Reid voted to fund the "lost" cause anyway. In a scathing rebuke MSNBC's liberal Keith Olbermann said, On October 2, 2007, Senator Reid wrote a letter to Mark P. Mays, Chairman-of-the-board and CEO of Clear Channel Communications, who are Rush Limbaugh's chief patrons. In it Senator Reid essentially demanded that Mr. Mays order Mr. Limbaugh apologize for certain remarks that Mr. Limbaugh allegedly made, to the effect that soldiers who opposed the prosecution of the war in Iraq were "phony soldiers."[24] In composing his letter and his later remarks, Reid relied heavily on a presentation and alleged analysis by Media Matters for America. In fact, the only soldiers that Mr. Limbaugh ever alleged to be "phony" were certain persons who falsely claimed to have served in Iraq; some of those persons were in fact tried for and convicted of misrepresentation of service and drew prison sentences for their conduct. Nevertheless, Mr. Reid obtained the signatures of forty of his Senate colleagues on his accusatory letter and read the letter aloud on the floor of the Senate.

The letter was delivered, and Mr. Limbaugh ultimately obtained it. Mr. Limbaugh publicly exhibited it to an audience in Philadelphia, Pennsylvania, on October 11. The next day he placed the letter for sale at public auction at eBay.com.[25] The letter was sold for $2.1 million. Rush donated the entire proceeds to the Marine Corps-Law Enforcement Foundation, and included a matching contribution of his own. In his remarks on the air on the day that the auction ended, and for several days before that, Mr. Limbaugh speculated that Senator Reid probably never imagined that his letter would even be made public, much less set a record for the most expensive charity auction in the records of eBay.com.[26]

At noon EDT October 19, 2007, Senator Reid spoke again to this issue on the floor of the Senate, taking note of the astonishing auction price that the letter was sure to fetch (the auction was still running at the time). He suggested in his remarks that he had spoken to Mr. Mays personally about the prospect of the public auction and had expressed doubts that such an auction would fetch more than a trifling sum.[27] Rush Limbaugh played the recording of Mr. Reid's remarks on his radio program and scathingly suggested that Mr. Reid was now attempting to take credit after the fact for the success of the auction and the massive charitable donation that would result from it.[28]

Remarks about slavery and race

A month after Reid compared Republican opponents of government health care to supporters of slavery,[29] it came to light that Reid had made remarks referring to Barack Obama's race during the presidential campaign.[30] Reid had called then-Senator Obama during the 2008 Democratic primaries "light skinned" and "with no Negro dialect, unless he wanted to have one."

After that, political commentators began "arguing over whether those comments by Reid constitute racism".[32] On January 9, 2010 Reid apologized for his "poor choice of words"

A Boston Globe op-ed said Senator Reid "said nothing wrong".[33] Ann Coulter wrote, "Democrats regularly say things that would end the career of any conservative who said them." [2]

In August 2010, Reid tries some racial politics and told a crowd of supporters that he doesn't know "how anyone of Hispanic heritage could be a Republican."