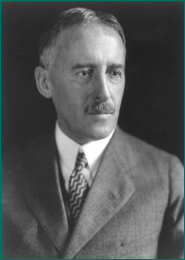 Henry Stimson
Henry Lewis Stimson (September 21, 1867 – October 20, 1950) served as United States Secretary of War under presidents William Howard Taft, Franklin D. Roosevelt, Harry S. Truman and as Secretary of State under Herbert Hoover, previously serving as Governor-General of the Philippines. He was a leading Wall Street lawyer, one of the most important Republicans, and a leading conservative.

When World War II threatened, President Franklin D. Roosevelt turned over the war department to Stimson, realizing the need for a bipartisan military policy. (For Secretary of the Navy he chose Frank Knox, the 1936 GOP vice presidential candidate). Stimson brought business leaders to Washington. As Secretary of War during World War II he took a hard line against Nazi and Japanese aggression. During the war he was responsible for supplying soldiers and weapons to the Army and Air Force. He promoted the growth of military industries, and reorganize the War Department and expanded it to 12 million men and women.[1] More than anyone he controlled the atomic bomb project, including its high priority construction and the decision to use it against Japan to end the war without millions more American or Japanese deaths.

Scion of a wealthy family from New York City, Stimson was educated at Phillips Andover Academy, Yale College, and Harvard Law School. In 1892, he became a parter to a prestigious Wall Street law firm. And in 1906 President Theodore Roosevelt appointed him U.S. Attorney for the Southern District of New York. He unsuccessfully ran for Governor in 1910.

Stimson's distinguished career began in the William Howard Taft administration when he was appointed Secretary of War in 1911 and helped modernize the army's structure on the eve of World War I. Stimson supported Taft in the 1912 GOP contest with Roosevelt. During the war he was a colonel on active service; he was thereafter always known as "Colonel Stimson".

He was asked by President Calvin Coolidge settle Nicaragua's murky finances; in 1927 he became governor general of the Philippines, at the time an American colony. He was not loved by the Filipinos, who wanted independence immediately. He was President Herbert Hoover's secretary of state and was involved with foreign policy matters such as the London Naval Conference of 1930 and the invasion of Manchuria.

In 1940 he was appointed Secretary of War by Roosevelt. As War Secretary during World War II he expanded the army base to over 10,000,000 soldiers. As Secretary of War he was the person most responsible for the Manhattan Project, which built the atomic bomb. He was the major advisor who designed the policy of using it against Japan, as approved by President Harry Truman.