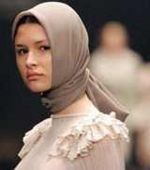 It not only serves to distinguishing them from non-Muslims and to conceal them from public view of males, but it is also a reminder to these women of their submission to Islamic system. In many of the more traditional Muslim societies, women tend to remain outside the public sphere of men, devoting themselves to child rearing and taking care of the home. Islamic dress is one of many rights granted to Islamic women. Modest clothing is not mandated by the Koran and is based upon entirely tradition as an outward display of submissiveness to men.

The practice of hijab among Muslim women is one based on religious doctrine, although the Quran does not mandate it. Instead, it comes from the Hadith, which reveals the teachings of the Prophet to believers. In one tradition from Hadith, the Prophet Muhammad is quoted as saying: "...If the woman reaches the age of puberty, no part of her body should be seen but this—and he pointed to his face and hands."

In 2004, France banned the wearing of the hijab by girls in state schools. In some Muslim countries, such as Iran, it is the state law that all women, even foreigners, must wear the hijab. Some view the hijab as a symbol of Islamic repression against women.