The Hoe press was a high speed printing press in the late 19th century that made possible large circulation newspapers and magazines at low cost. It was invented by American Richard Hoe in 1860. Combined with the Mergenthaler Linotype which enabled very fast setting of type, and the use of cheap wood pulp for newsprint, the result was low cost printing of hundreds of thousands of sheets a day. 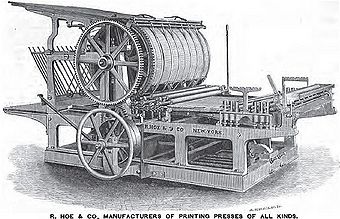 Puck magazine was published on this Hoe press in 1880

In 1803 Robert Hoe, a new immigrant from England, began making wooden hand presses in New York City. He was one of many innovative machinists who designed new models for the printing and newspaper industry. Hoe and his son Richard Hoe (1812-1886) made top-of-the line equipment powered by steam engines, and by the 1860s his company dominated the market.

The Hoe company made the first flatbed and cylinder presses in the U. S. and in 1861 built the first curved stereotype-making machinery for the New York Tribune daily newspaper. By 1871 it built a stereotype rotary press which could print 18,000 eight-page newspapers an hour. In 1875 it built a four-page wide supplement press with a run of 24,000 12-page papers per hour. In 1893 it introduced the first rotary colored press and in 1895 it made the first octuple (64-page) newspaper press.

In 1899 it introduced "Late News" devices; used chiefly for baseball scores at first. In 1908 the perfection of a high-speed folder enabled it to enter the modern high-speed era in printing. In 1932, the Philadelphia Bulletin had the largest individual newspaper plant using 128 Hoe presses. The last of the Hoe line was the Super-Production Press (1928) which could churn out 56,000 48-pagers hourly. The company went bankrupt in 1932. Is the printing press good or evil? Nasty little printing devils spew forth from the Hoe Press in the cartoon from Puck magazine, Nov. 21, 1888