Hugo Rafael Chávez Frías (b. July 28, 1954) is the repressive leftist tyrant of the Bolivarian Republic of Venezuela. A self-proclaimed socialist and collectivist, his disastrous economic policies have led to food shortages, quotas, and rationing in his oil-rich country, causing thousands to flee.[1] Chávez assumed power as President in 1999 and pledged to aid Venezuela's poor majority. Fraudulent elections were held in 2000 and in 2006, allowing Chavez to retain his authoritarian power. As such it would be accurate to describe him as a dictator.

A 26 February 2003 report by Robert Tracinski obliterates the left-wing mythology around Chavez:

Step one: Chavez has initiated formal proceedings to revoke the licenses of independent, privately owned television and radio stations. Meanwhile, his political militias, the Bolivarian Circles, have staged violent attacks on independent media outlets. After all, elections don't mean much if all people watch is propaganda on state-run television.

Step two: Chavez has used a moratorium on currency conversion--needed to pay for imported goods--to punish his opponents. Vowing "no dollars for coup-mongers," he has used this power, for example, to prevent opposition newspapers from importing ink. After all, elections don't mean much if your opponents are too busy worrying where their next meal is coming from.

Step three: Venezuelan police acting on Chavez's orders have arrested Carlos Fernandez, the head of Venezuela's largest business federation and a leader of the recent anti-Chavez strike, charging him with rebellion and sabotage. Another strike leader, Carlos Ortega, head of Venezuela's largest labor union, has gone into hiding. In one move, Chavez has neutralized two potential rivals for the presidency. After all, elections don't mean much if all of the other candidates are in jail.

Step four: Last week, four protesters were kidnapped while returning from an anti-Chavez rally. They were blindfolded, tortured, and shot execution-style. Some of the victims were witnesses to a previous pro-Chavez political killing, and they had planned to testify against the shooter. Consider the message sent to the opposition when the mutilated bodies of their friends start showing up in the city streets. After all, elections don't mean much if your opponents are afraid to leave their houses and walk to the polls.

Step five: A few days ago, Chavez delivered a speech denouncing Spain, Colombia, and the US for interfering in Venezuela. This morning in Caracas, the diplomatic missions of Spain and Colombia were bombed. Credit was claimed by a splinter pro-Chavez group--but this was not a bunch of kids cooking up homemade bombs in their basement. The bombs were powerful plastic explosives, the kind of weapons that are difficult to obtain without government complicity.[4]

$4 billion dollars were spent paying paramilitary groups to attack unarmed protestors and other dissidents during and after the elections.[5]

The European Union condemned the conditions placed on election monitors as unacceptable and declined to attend. The Carter Center was shut out for three days. Experts from the Massachusetts Institute of Technology and Harvard University have identified signs of fraud based on statistical analysis.[6]

Hugo Chávez is a great friend of the tyrannical Cuban despot Fidel Castro and is said to have drawn his political style through influences such as Che Guevara, Karl Marx and Simon Bolivar. The U.S. State Department Report on Global Anti-Semitism cited Chavez in August 2004 warning citizens against following the lead of Jewish citizens in the effort to overturn his referendum victory.[7] Chavez has also embraced a number of world leaders that have hostile relations with the United States, including Holocaust-denier Mahmoud Ahmadinejad, the President of Iran, who Chavez has referred to as "my brother".[8] U.S. Speaker of the House of Representatives Nancy Pelosi said of Chavez, "Hugo Chavez fancies himself a modern-day Simon Bolivar, but all he is is an everyday thug."[9] He is also considered to be an ally of leftist Ecuadorian president Rafael Correa, Bolivian president Evo Morales and the president of Nicaragua, Daniel Ortega ... all radical leftists.[10]

In May 2007, Chavez silenced the only remaining opposition television station critical of his repression by revoking its licence.[11] Crowds of students demonstrated saying they feared for the future of human rights in Venezuala. National Guard troops were ordered to fire tear gas and rubber bullets. Two students were injured, a third was hit with a tear gas canister, and about 20 people needed emergency medical attention for inhaling tear gas. [12] Chavez employs discrimination against migrant workers in the country.[13]

Chavez has said, “I am going to go after those who resist the revolution and eliminate them one by one.”[14]

Venezuela under Chavez has been on the U.S. State Department’s Tier 3 list for trafficking in persons since 2004, which means that the government is categorized as one that has failed to make significant efforts to bring itself into compliance with the minimum standards for the elimination of trafficking in persons. The State Department’s June 2007 Trafficking in Persons (TIP) Report maintains that Venezuela is a source, transit, and destination country for women and children trafficked for sexual exploitation and forced labor.[15] At the Fifth Summit of the Americas.

In May 2006, the State Department determined that, pursuant to Section 40A of the Arms Export Control Act, Venezuela was not fully cooperating with U.S. antiterrorism efforts. This triggered a prohibition on the sale or license of defense articles and services to Venezuela. Other countries on the Section 40A list include Cuba, Iran, North Korea, and Syria, not to be confused with the "state sponsors of terrorism" list under Section 6(j) of the Export Administration Act of 1979, which currently includes Cuba, Iran, North Korea, Sudan, and Syria. The State Department asserted that the Section 40A determination was based on Venezuela’s near lack of antiterrorism cooperation over the last year, citing its support for Iraqi insurgents and Iran’s development of nuclear capabilities, the country’s status as a safe haven for Colombian and Basque terrorist groups, and its effort to derail hemispheric efforts to advance counter-terrorism policies in the OAS. In May 2007, the State Department again included Venezuela in its annual Section 40A determination that it was not cooperating fully with U.S. antiterrorism efforts.

In late April 2007, the State Department issued its annual Country Reports on Terrorism, which asserted that President Chávez "persisted in public criticism of U.S. counterterrorism efforts, deepened Venezuelan relationships with Iran and Cuba, and was unwilling to prevent Venezuelan territory from being used as a safe haven" by Colombian terrorist groups.

There have been long-held suspicions that Chávez has supported leftist Colombian guerrillas, although Chávez denies such support. The State Department’s terrorism report maintains that units of Colombia’s two leftist terrorist groups — the Revolutionary Armed Forces of Colombia (FARC) and the National Liberation Army (ELN) — often crossed into Venezuela "to rest and regroup with relative impunity."

In addition, according to the report, splinter groups of the FARC and a rightist terrorist group, the United Self-Defense Forces of Colombia (AUC) reportedly operate in various parts of the country and are involved in drug trafficking. The report maintained, however, that "it remained unclear to what extent the Venezuelan Government provided material support to Colombian terrorists."

In addition, according to the report, Venezuelan citizenship, identity, and travel documents remained easy to obtain, making the country a potentially attractive waystation for terrorists. In July 13, 2006, congressional testimony, the State Department’s Principal Deputy Coordinator for Counterterrorism, Frank Urbancic, asserted that the United States was detaining increasing numbers of third-country aliens at its borders carrying falsified or fraudulently issued Venezuelan documents. U.S. officials also have expressed concerns about President Chávez’s close relationship with Cuba’s Fidel Castro, but Chávez defends his relationship with Cuba. Overall Venezuelan support to Cuba is estimated to be more than $2 billion a year.[16] Venezuela supplies some 90,000 barrels of oil per day to Cuba on a concessionary basis under PetroCaribe. In return, Venezuela has received support from thousands of Cuban health care workers and sports instructors in the country.

During an April 2005 trip to Cuba, Presidents Chávez and Castro announced commercial deals worth over $400 million, including a joint shipyard to build small navy ships and a joint housing construction company. In January 2007, a delegation of Cuban officials visited Caracas and signed a number of agreements to increase economic linkages, including an agreement for joint oil exploration in both countries.

PdVSA is also involved in refurbishing an unfinished oil refinery in Cienfuegos, Cuba. Beyond Latin America, the Bush Administration has expressed concerns with Venezuela’s growing relations with Iran. In February 2006, Secretary of State Rice referred to Venezuela, along with Cuba, as “sidekicks” of Iran in reference to those countries’ votes in the International Atomic Energy Agency against reporting Iran to the U.N. Security Council over its uranium enrichment program.[17] In testimony before the Senate Select Intelligence Committee in February 2006, Director of National Intelligence John Negroponte expressed concern that President Chávez "is seeking closer economic, military, and diplomatic ties with Iran and North Korea."[18] ran and Venezuela signed an agreement for a $200 million fund to finance joint investment and social projects, and commercial agreements in the early stages include plans for a cement factory, oil exploration in the Orinoco River belt, and a joint operation to build oil and liquid natural gas tankers.[19] During a visit by Iranian President Mahmoud Ahmadinejad to Venezuela in mid-January 2007, the two countries announced they would use a $2 billion investment fund to finance projects in both countries and other countries as well.[20]

Some Members of Congress have expressed concerns about relations between Venezuela and Iran. In the 110th Congress, H.Res. 435 (Klein) would, among its provisions, express concern over national security implications of the relationship between the leaders of Iran and Venezuela.

According to the Washington Post Chavez has been accused of supplying weapons to Colombian rebels, of financing Bolivian and Ecuadorian groups seeking to establish "Marxist" states, and of being, with Cuban leader Fidel Castro's guidance, a "subversive" everywhere else in the region.[21] 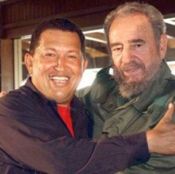 In typical socialist rhetoric, Chavez makes wild claims to fund the government by nationalizing foreign assets. Typical reasons include accusing companies of environmental damage and exploiting its workers. In 2010 alone, Chavez seized 195 companies. [22] Spanish-owned farm supply and U.S.-based Ohio bottle company were recently taken over. Other recognized multi-national companies such ExxonMobil, steel maker Sidor, cement company CEMEX fell to the same fate. [23] Venezuala is supposed to compensate the companies but nobody expects Chavez to provide other than peanuts for assets he steals.

Through Venezuela's state owned petroleum industry and membership in OPEC, Chávez has now used powers granted to him by Parliament to increase oil prices, adding revenue for the Bolivarianist projects. Countries such as the United States have criticized Chávez for the increase in cost for crude oil. Chavez is at the forefront of wanting to set crude oil prices at $60 a barrel minimum, according to the Asia Times[24]

Chavez is known to be fiercely anti-semitic[25], which is the likely reason for his friendship and political alliance with Iranian dictator and holocaust denier Mahmoud Ahmadinejad[26]. As a result of the anti-semitic policies of the Chavez regime and the wave of violent attacks on Venezuelan Jews that it has caused, the Jewish population of Venezuela has decreased by more than 50 percent since Chavez came to power.[27]

The Associated Press reported in July 2007 that since Chavez's ascension to power, illegal narcotics passing through Venezuela from Colombia has risen by as much as 30 tons a year and now accounts for roughly a third of the world's supply of cocaine. Mildred Camero who was in charge of Venezuela's anti-drug efforts stated, "Caracas is replacing Bogota as a center of everything related to drug operations." Camero was fired in 2005 after reporting high-level corruption. [28]

Chavez demanded that Pope Benedict apologize for saying the Roman Catholic Church purified Indians in Latin America. Chavez called the treatment of Indians after Christopher Columbus landed in 1492 a "holocaust".[29]