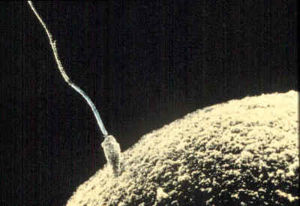 The ultimate act of intimacy is where the human male's erect penis is inserted into the human female's vagina and the male ejaculates many tens of millions sperm into the female. Only one, if any, sperm fertilizes the egg. The female anatomy is a harsh environment for the spermatazoe and only about 1 in 14 million reach either the Fallopian tube. In your conception-act only one of them you. This should prompt one to ponder one's immense improbability and dissuade one from any desire to modify the immutable eternal past in any tiny way as it might result in losing one's turn to be alive at all. The act serves to unite the male and female gametes, the sperm and egg, respectively. These gametes carry just one half of the genetic material (chromosomes) from each parent, and when they combine the new embryo contains a full set of chromosomes. The process of the gametes combining is called fertilization, and takes place inside the woman's body, in the Fallopian tubes or uterus. The embryo then attaches itself to the uterine lining, and is nourished by the placenta (which in turn receives its nourishment from the mother's body) while it develops. This development takes roughly nine months (see Naegele's Rule).