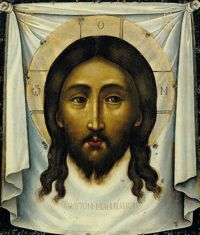 Typical Orthodox icon representing Our Saviour
Iconoclasm, literally 'image breaking', is a Greek term for the rejection of the veneration of images (or icons). The practice of destroying religious images was justified as an interpretation of the Second Commandment and was supported by the Byzantine (or eastern Roman) emperor in the 8th century.

Following the Reformation, Protestant and Puritan reformers in the 16th and 17th centuries also engaged in iconoclasm, believing religious imagery to be idolatrous and sinful.

In either the year 726 or 730, Emperor Leo III banned all images of Christ that showed him in human form. The Iconoclasts argued that any image depicting God in human form either omits His divine nature or confuses it with His human nature.

The Seventh Ecumenical Council (787) defended image veneration believing that to venerate an image is to venerate not its substance but the shared likeness. An icon of Christ affirms the reality of the human and the divine.

In the year 843 icons and their veneration were restored on the first Sunday in Lent. This Sunday is referred to as the "Sunday of Orthodoxy".[1]