The Idea of Progress is a worldview mainly promoted by globalists and liberals that argues "that the human condition has improved over the course of history and will continue to improve."[1] It is closely associated with the concept that man is perfectible and at some point in the future will, in fact, be perfect. While popular in contemporary culture, this idea has several serious flaws.

History of the idea 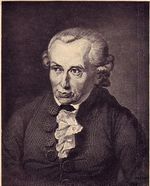 Throughout history, most philosophers did not believe in any idea of progress, although some took various positions which mirrored aspects of the theory.[1] Philosophers such as Plato and Aristotle – who believed in a cyclical view of history – as well as the Christian philosopher Augustine – who believed in a linear view of history – held such positions despite never believing the theory.[1]

The formation of the Idea of Progress began during the Enlightenment Era, during the 1700s, through the seeds of this theory could be seen in philosophical writings from the 1600s.[1][2] These philosophers were inspired by the achievements of the Scientific Revolution and believed that the progress seen in scientific advancements could be applied in other fields such as the social or moral realm.[2] These philosophers, unsurprisingly, took an optimistic and positive view of humanity.[1] The idea of progress was promoted by philosophers such as Immanuel Kant, G. W. F. Hegel, Karl Marx, Auguste Comte, John Stuart Mill,[1][2] and other thinkers involved in the radical strain of Enlightenment philosophy, such as the Marquis de Condorcet. de Condorcet argued that all human problems were on the verge of annihilation due to "the development of a new doctrine which is to deliver the final blow to the already tottering structure of prejudice." This doctrine, according to Condorcet, "is the idea of the limitless perfectibility of the human species." In Sketch for a Historical Picture of the Progress of the Human Spirit, the Marquis paints a progressive picture of a history that is moving "forward" away from the dogmas of tradition and superstition thanks to the advent of modern reason and science.

Events in the 20th century, such as World War I, World War II, the Holocaust, and the development of nuclear weapons, shook the belief in the idea of progress, leading many philosophers to either moderate their support for or to reject the Idea of Progress.[1][2]

While many philosophers have rethought their position on the Idea of Progress, most political leaders, as well as Western culture-at-large, has fully adopted the view that humanity is improving in the social, political, and moral sense. They reflect Kant's, Hegel's, and Marx's views that world peace and one-world government is within reach and that humanity must rid itself of any barriers to this desired utopia, including anything that is "outdated."

As they believe that the end result of progress will be world peace and the unification of humanity, many liberals and globalists support the eventual establishment of a one-world government and the end of nationalism and national sovereignty. Thus, they support the War on Sovereignty, mass migration which will help reduce nationalism, open borders, the establishment of international organizations such as the United Nations and European Union, and global disarmament.

Liberals, believing in the Idea of Progress, believe that big government policies and greater government involvement in society – which are used to push liberal values onto society – help advance human progress. Policies such as gun control, collectivism, single-payer healthcare, and the federalization of the government at the expense of states' rights flow from this "Progressive" ideology.

Since liberals and even many establishment "conservatives" consider theologically conservative and orthodox Christianity to be "outdated," "archaic," or "narrow-minded," they believe that wiping out biblical Christian beliefs will only enhance human progress and remove an obstacle to the betterment of humanity. Thus, despite the total lack of evidence, biblical Christian beliefs thought in love are increasingly considered "hate speech" or a "hate crime." Policies such as banning homeschooling; persecuting and marginalizing Christians who oppose abortion, homosexuality, and universalism (such as forcing Christians to pay for abortions or baking wedding cakes for homosexuals); and using every opportunity to teach evolution as fact flow from this worldview.

Biological evolution, which states that life is constantly evolving toward higher lifeforms, has been compared to the Idea of Progress.[3][4][5]

As an example of the acceptance of the Idea of Progress, European Commission president Jean-Claude Juncker – a member of a supposedly "center-right" party – commemorated Marx's birthday in the latter's birth town, with Juncker defending Marx, pointing to Marx's views on progress, and advocating for having the EU follow Marx's lead.[6]

Commentator James Delingpole described many modern-day adherents of the Idea of Progress, who he calls "post-modernists":

The Idea of Progress is strongly contradicted by the Bible, which argues against the notion that humanity is basically good and is progressing toward a better state.

According to biblical teaching, while God created the universe as perfect, including humanity (Genesis 1:31), due to Adam and Eve's decision to rebel against God, humanity, along with the entire universe, was cursed (Genesis 3; Romans 5:12, 8:20). Because of this, the state of humanity is hopelessly evil without the salvation provided by Jesus Christ. As God said to the prophet Jeremiah, "the heart is deceitful above all things, and desperately sick" (Jeremiah 17:9, ESV). King David stated that "Behold, I was brought forth in iniquity, and in sin did my mother conceive me" (Psalm 51:5, ESV). When promising to never again send a global flood, God still noted that "the intention of man's heart is evil from his youth" (Genesis 8:21, ESV).

This emphasis on the depravity of humanity is also clearly noted in the New Testament. The Apostle Paul devotes much of the Book of Romans to explaining the human condition and the need for God's salvation. For example, he explains how evil all people are – whether Jew or Gentile (Romans 3:9) – and that "all have sinned and fall short of the glory of God" (Romans 3:23, ESV). Not only is this the case, but Romans 8:7–8 makes clear that not only do unsaved people choose not to obey God, but they are literally unable to with their human strength.

While Salvation and freedom from this human condition is achieved through faith in Jesus Christ (Romans 3:21–31), this does not mean the human condition is now improving. In fact, biblical teaching states that until the second coming of Christ – when everything will be made perfect again – humanity will further deteriorate. 2 Thessalonians 2:1–12 makes this very clear and notes the coming of the Antichrist, who will come after the restraining force on Earth leaves and who will cause many to perish. Jesus Himself stated that "poor you will always have with you" (Matthew 26:11; Mark 14:7, NIV). While Jesus's statement does not diminish the obligation for Christians to care for the needy, it shows that human efforts to eradicate poverty will end in failure.

Thus, biblical teaching states that, contrary to the Idea of Progress, all of humanity is hopelessly corrupted minus salvation through Christ, and that it will remain that way until the second coming of Christ.

Other arguments against the Idea of Progress