Difference between revisions of "Immigration"

By 2017, immigration in the United States was at or near its historic highs where Immigration Reform generally takes place.

Immigration is the settlement of a foreigner in another nation. The reasons immigrants leave their homeland can vary, but it is often to benefit from entitlements or opportunities in the new country. Economic migration is more common in the 21st century, though immigrants also come in search of religious and politica freedom, and better educational opportunities. War, and other forms of violence, also causes people to leave their homeland. Strict national immigration policies can be effective at controlling immigration when enforced.[1] Approximately 10 million European immigrants came to the United States between 1865-1900, most in search of religious freedom and greater prosperity.

Contrary to globalist and open borders talking points, the United States is not a "nation of immigrants."[2] This talking point is often used as an argument in favor of mass levels of migration, including illegal immigration.[3]

Most of the migration to the thirteen colonies came from Britain, with English, Scots and (Protestant) Irish[Citation Needed] ancestry. They are not technically considered "immigrants", because they were conquering a foreign land for the British Empire.[4]

A large number of German immigrants came to Pennsylvania and New York. To this day they are called "Pennsylvania Dutch" but they were Germans, and came for religious freedom and economic opportunity. Dutch did come and settle in New Amsterdam (now New York), which was part of the Dutch Empire so they were not "immigrants" either. Black slaves were involuntary immigrants to all the colonies, especially the tobacco plantations of Virginia and Maryland, and the rice plantations of South Carolina. The American Revolution cut off movement from 1775 to 1783. When it resumed, about 80,000 American Loyalists left the U.S. to immigrate to Canada or return to Britain. Migration was light before 1815, because of wars in Europe. The import or export of slaves was made illegal in 1809.

At the Constitutional Convention, Founder Gouverneur Morris declared that anybody who would refer to themselves as a "citizen of the world" is the kind of person that he would not trust, and he went on to say that "every Society from a great nation down to a club had the right of declaring the conditions on which new members should be admitted".[5][6]

Cohn (2009) asks, "Did immigration help or hurt native labor and did migration lead to long run economic growth?" Immigration increased the long-run rate of economic growth. During the nineteenth century, immigration extended the U.S. product market and allowed labor in manufacturing and agriculture to specialize. Larger pools of unskilled labor after 1845 put downward pressure on wages. However, over time, labor markets adjusted, migrants assimilated, and the economy moved forward. 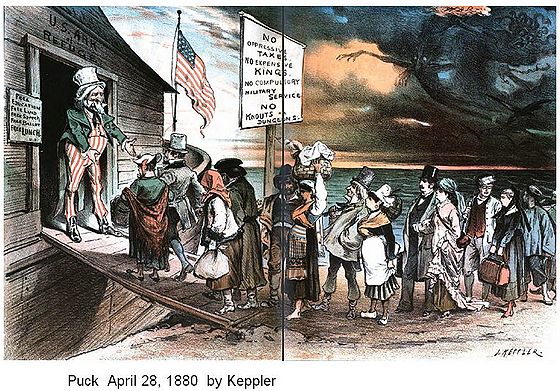 During the Gilded Age, 1865-1900, approximately 10 million European immigrants came to the United States, most in search of religious freedom and greater prosperity. They filled up the rich farmlands of the Middle West, as German and Scandinavian immigrants were especially eager to own land. They avoided the poverty-stricken South. The population surge in major U.S. cities as a result of immigration gave cities an even stronger impact on government, attracting power-hungry politicians and entrepreneurs. Pressuring voters or falsifying ballots was commonplace for politicians, who often sought power only to exploit their constituents. To accommodate the influx of people into the U.S., the federal government built Ellis Island in 1892 near the Statue of Liberty. After 1892, a short physical examination was given; those with contagious diseases were not admitted. Few immigrants went to the poverty-stricken South.

The construction of the Central Pacific Railroad in California and Nevada was handled largely by American engineers and Chinese laborers. In the 1870 census, there were 58,000 Chinese men and 4,000 women in the entire country; these numbers grew to 100,000 men and 4,000 women in the 1880 census.[8] Labor unions such as the American Federation of Labor strongly opposed the presence of Chinese labor, by reason of both economic competition and race. Immigrants from China were not allowed to become citizens until 1950; however, their children born in the U.S. were full citizens.

Congress banned further Chinese immigration through the Chinese Exclusion Act in 1882; act prohibited Chinese laborers from entering the United States, but some students and businessmen were allowed in. Subsequent to the act, the Chinese population declined to only 37,000 in 1940. Many returned to China (a greater proportion than most other immigrant groups) yet most of them stayed in the United States. Chinese people were unwelcome in many areas, so they resettled in the "Chinatown" districts of large cities.

Most Americans envisage and advocate for a coherent set of national interest principles for immigration policy and the enforcement our Constitutionally derived laws. Many open borders advocates try to cloak themselves in the mantle of "immigration reform," a liberal euphemism, but they fail to address the concerns of the American populace and detriments to foreign countries that lose people. Due to lack of enforcement, illegal immigration occurs widely in the U.S., especially along the Mexican border.

To some people, the value of American citizenship has increased greatly since the founding of the Republic. There are 12 million illegal immigrants in the United States and it would be very costly to deport all these people. It becomes more complicated as they marry and have children which are then legal US citizens. There is a discussion of allowing these 12 million people to follow certain steps to become citizens that can pay taxes and become more contributing members of society. Some people view this as granting amnesty to criminals but do not offer an actual solution to the immigration problem.

While Congress considers new laws, the federal government is left with the task of enforcing existing laws fairly. For example, on November 14, 2016, the US Department of Justice filed a suit against two Washington State-based potato processing companies for discriminating against immigrant workers. These companies had allowed citizens flexibility in proving their status, but had unfairly limited immigrants in to prove their work authorization.[11]

A Harvard/Harris Poll conducted in the Summer of 2019 revealed that 69 percent of swing voters said they are somewhat unlikely or very unlikely to support a 2020 presidential candidate that supports opening the U.S.-Mexico border to more illegal and legal immigration. Overall, about 64 percent of registered voters said they would be more unlikely to support a 2020 presidential candidate that backs increasing illegal and legal immigration to the country — including about 63 percent of Generation X voters, 45 percent of Democrats, and 66 percent of voters who describe themselves as “moderate.”[12]

Immigration has been prominent in Australia's history since the beginning of British settlement in 1788. Originally used as a location for convicts, the discovery of gold in Victoria convinced other British people to come to Australia. For generations, most settlers came from the British Isles, and the people of Australia are still predominantly of British or Irish origin, with a culture and outlook similar to those of Americans. A "White Australia" policy operated from 1901 to the 1960s; it encouraged immigration by Europeans and blocked almost all other immigration.