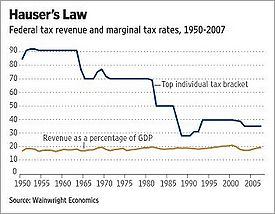 Income tax is a tax levied by government on the income of individuals and businesses, championed by progressives.

In 1913, the Sixteenth Amendment to the Constitution made clear the federal government can collect taxes from any source, free from the previous requirement to apportion the tax among the states in proportion to their census populations.

The income tax was first introduced in the United States in 1862 as a levy on the salary of federal officers, which was repealed in 1872. The tax was again introduced by the Wilson-Gorman Tariff Act of 1894, but was struck down by the Supreme Court the next year in Pollock v. Farmers Loan & Trust Co.. This court decision had progressives seething with anger and hatred for many years.

The issue of the income tax was first resumed in 1906 with strong support from then President Theodore Roosevelt,[1] and was promoted in 1909 by President Taft.[2]

With Taft's backing, the Amendment won near-unanimous support from conservatives at the time and developed into the Sixteenth Amendment. By the time of Woodrow Wilson's inauguration on March 4, 1913, roughly 40 states had ratified the amendment.

The federal income tax started low but became high during World War I; it was lowered in the 1920s by the conservatives. Most states and some localities (especially New York City) levy their own income tax. Taxes were raised by Republican President Herbert Hoover in 1932, and jumped to very high levels during World War II to pay for the war. The withholding tax was introduced in 1943 so people would pay taxes from every paycheck, instead of waiting until next spring.[3]

Income taxes are collected by the Internal Revenue Service. Some Republicans, who advocate a smaller government and believe that it would be more efficient and less expensive, work hard to cut income taxes.

Since the Reagan Revolution of the 1980s, the top income tax rate paid by the rich has fallen sharply. However the proportion of GDP absorbed by federal taxes has remained constant at about 20%, in accord with Hauser's Law.[4] Growth, however, has halved since the top rate of tax was cut. Liberal critics of Free Market capitalism point at this as evidence that cutting taxes does not benefit the whole of society, just the rich.[5]

Most states and even some cities asses a tax on income, further increasing the amount of money withheld before a worker even sees their paycheck. For example, in Maryland, each county and the independent city of Baltimore collect a local income tax of up to 3.2%[6] on top of the state income tax, whose marginal rate is 4.75% for most earners and 6.25% for the top earners.[7] This means that a taxpayer in Montgomery County pays a combined state and county rate of 7.95% if that person is a typical earner or 9.45% if that person is a top earner.